The North Face’s easy-to-carry Bozer Cross Body may be small, but its upright stash pocket is useful for bulky quick-grab everyday carry items.

With a name like “Bozer,” you might imagine that The North Face’s Bozer Cross Body would be a behemoth of a bag, fit for a certain (but fictional) Italian plumber’s arch-nemesis. Perhaps you’d picture this to be a 10-something-liter sling to rival Chrome Industries’ Kadet, a sling we noted for its large size. Then there’s the keen-eyed among you who’ve probably already read our review of the other Bozer and already know it’s none of those.

Technically speaking, the Bozer Cross Body and the Hip Pack III are both two-liter bags. However, their respective designs result in the Cross Body being noticeably smaller. Don’t cross it off your list just yet, though, because while it may be smaller, that doesn’t make it less capable. Its harness system is more flexible and able to adapt to different styles of carrying. Plus, its stash pocket is oriented vertically, so there’s less worry of items inside falling out by accident.

If you’ve read our review of the Bozer Hip Pack III and found yourself wanting something just a bit smaller, then read on. If you haven’t, then start here, then hop onto Hip Pack III review; you might just find something you like between the two.

Aesthetic-wise at least, the Bozer Cross Body is just a tad bit more appealing. On the whole, though, both Bozers aren’t really that far off from each other in terms of appearance. To put it another way, other people probably won’t notice the difference if you wore the Cross Body one day and switched to the Hip Pack III the next. Unless, of course, they’re in a different colorway.

As it usually is with bags from The North Face, the Bozer Cross Body comes in a number of colorway options. Our sample is Faded Rose, the same colorway we chose for the Bozer Hip Pack III. At the time of writing, there’s also the Pike Purple version which follows the same pattern of the Faded Rose. Then there are the funkier flavors like the Arrowwood Yellow Leopard Print, Transantarctic Blue, and Silver Grey Leopard Print. These three are arguably the real head-turners, and they’re probably your best bet if that’s what you’re going for.

Onto the more practical side of things, it’s the same cast of quality materials found on the Hip Pack III. The main fabric is 600-denier 50% recycled polyester with DWR (durable water repellent) coating. Meanwhile, the translucent fabric of the stash pocket is CORDURA Ripstop Nylon. Although the fabric is technically translucent, it’s not translucent enough that other people will be able to tell what’s inside.

Hardware-wise, the buckles are from Duraflex. Given that they play a major role in the Bozer Cross Body’s harness system, they’ve held up pretty well, remaining pristine even after repeated usage. Last but not least, the zippers are reliable YKK-branded ones. Their short and thin paracord pulls don’t look like much, but they’re proportional to the bag’s small size, and they get the job done.

The Bozer Cross Body’s harness system is centered around a simple strap. One end is permanently attached at the top left corner (facing the back panel), while the other terminates on a quick-release buckle. The strap can attach to two points on the right side: an upwards-facing one at the top right and a side-facing one at the bottom right corner.

Anchoring the strap to the top right buckle works great for day-to-day use because it’s more balanced and easier to shift around. But if you’re the type who rides a bike or does outdoor activities with a lot of movement, the bottom corner buckle is the way to go because it gives extra stability. That said, switching between the two attachment points isn’t something we do on a regular basis. We settle for the top right buckle for the most part, but we still dig the flexibility to adjust the harness system if we ever wish to do so.

You can even configure the Bozer Cross Body as a waist pack if you wish to do so. With the strap mounted to the top right corner buckle, simply tighten down the strap until it fits around the waist. As for the extra slack, that can be tied down by the built-in strap keeper. Alternatively, you can stash the strap into the back pocket and just use the Bozer Cross Body as a standalone pouch. It also has a small carrying handle, so you can attach it as an external pouch to a bigger bag like The North Face Recon.

While both the Bozer Cross Body and Bozer Hip Pack III are specced as two-liter bags, the latter is noticeably bigger. This is most evident when we compare the two’s stash pockets. Whereas the Hip Pack III’s can fit a 17-ounce Chilly’s Series 2 Water Bottle rather snuggly, it sticks out more than we’d like inside the Cross Body. That said, since the stash pocket on the Cross Body is oriented vertically, there’s a lesser need for bottles to fit deeply anyway, as it’s not as much at risk of falling out based on the angle alone. Ultimately, whether having a bottle in the Cross Body’s stash pocket is a good idea or not will depend on your bottle’s shape, size, and how comfortable you are with the way it sits.

The stash pocket is more than just for bottles, though. It’s more of a general-purpose pocket for quick-grab items. Say, for example, a pair of sunglasses, a flashlight, or even a power bank. Since the stash pocket’s opening leaves a tiny gap through the cinch, routing a charging cable through to your smartphone is fairly easy. The downside is that since there is a tiny gap, rainwater can potentially seep through.

The Bozer Cross Body’s main compartment is relatively tight. There’s only realistically enough room for everyday carry items. Bulkier items like a smartphone and a wallet will fit alongside a set of house keys attached to the built-in key clip. There’s also a backside liner pocket for smaller accessories where we put our ChapStick, and wireless earphones—additional items like a passport and transit tickets will fit, but not much more than that. Keep in mind that adding bulk to the main compartment pushed out the front, meaning less space available in the stash pocket.

The main compartment’s opening is narrower here than on the Bozer Hip Pack III. The smaller size makes the Bozer Cross Body the less spacious but more focused sling between the two. It is the more comfortable sling to carry, and its flexible carrying modes offer more versatility.

So while the Bozer Hip Pack III may be the bigger bag, the Bozer Cross Body still has its place. It’s for those who want a compact sling, but with the added functionality of the roomy stash pocket that makes the Bozers stand out.

Get your questions about the The North Face Bozer Cross Body answered from our team and the Pro Community right here on the page. Plus, join discussions with other members about gear, guides, and more. 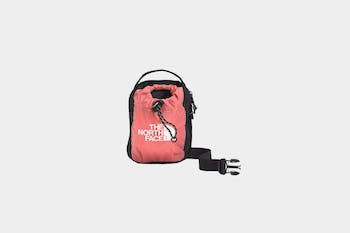