We like the ergonomic view the Perilogics Universal Airplane Phone Mount brings, but it takes some squeaky adjustments to get there.

Nothing beats bringing your own entertainment when you’re traveling. Why settle for the in-flight option’s limited selection when you can stuff as many movies and TV shows on your smartphone as you want? The problem is we neither have the patience nor the arm strength to hold our smartphone for an entire flight, be it domestic or international. Fortunately, there are travel-sized solutions out there designed to fill this need.

In this review, we’ll be taking a look at Perilogics’ solution to the problem: the Universal Airplane Phone Mount. The name is a bit dull, but you can bet it more than makes up for it in terms of functionality. While the plastic construction and bulk may not woo you at first, the ergonomic viewing angles it offers are hard to ignore. It’s a less stressful way to enjoy content during a flight, though we need to take a closer look at a few potential deal-breakers.

The Universal Airplane Phone Mount has two main parts, both of which are spring-loaded clamps. One clamp attaches to your tray table, while the other holds your smartphone. The clamps are joined together by a hinge that can also rotate. This grants the Universal Airplane Phone Mount a wide degree of adjustment—yes, that includes 360-degree rotation for you folks that like to consume media in portrait mode.

Each of the clamps works slightly differently. The one for your smartphone opens by directly prying the clamp apart. We typically do this with a (cased) smartphone directly, and anyone who’s used a similar clamp will probably do the same. Meanwhile, the clamp that attaches to the tray table has a lever protruding from the neck of the assembly that you push down to loosen the bottom half. It took us some time to get used to this because our instinct tells us to push the entire device down to loosen the clamp.

That sounds super complicated, but it’s really not once you see it in action. If we had to nitpick, the biggest problem with the Universal Airplane Phone Mount is its plastic construction. Once you operate the spring-loaded clamps, hinge, and swivel, you can’t help but notice the odd squeaks and noises coming from it. The noises can get loud, and it’ll definitely catch the attention of other passengers, so you’ll have to brace yourself for unwanted attention.

While we wouldn’t outright call this a flimsy device, the build quality isn’t exactly confidence-inspiring. There’s even some wobbling when you shake it, which isn’t ideal if you’re trying to focus on what you’re watching.

In practice, getting the optimal viewing angle is very easy, even during a flight. That said, the biggest factor that allows the Universal Airplane Phone Mount to get you the best viewing angle isn’t the rotation or the hinge; it’s the height. Since it mounts along the top edge of a folded-up tray table, it automatically gets an elevated position, netting you an eye-level view of your smartphone.

Moreover, since the Universal Airplane Phone Mount doesn’t require you to have the tray table down, you have more room to move your legs around. No more accidentally kneeing your table—and your phone—while you enjoy the Bee Movie for the nth time.

All of that said, you can also use the Universal Airplane Phone Mount as a stand akin to a tripod in case there’s no table or edge where you can attach it. The base is flat enough to keep it steady, and the instruction manual fully endorses the mode, so it is part of the design.

Unfortunately, all these features and benefits come at the cost of bulkiness. On the face of it, the size isn’t too bad. Perilogics even goes as far as to say that it’s pocketable. While you can technically carry it in your pocket, you probably won’t or can’t have anything else together with it since it’s about as compact as an office stapler.

It will fit most tech pouches and slings without an issue, even if they’re fairly slim. Just keep in mind that it takes up a good chunk of space. It probably won’t fit inside (or will stick out of) most mesh pockets, so you’ll have to put it in the more open areas alongside bulkier tech gadgets like your power bank, portable drive, and travel mouse.

For context, here we have two compact tripods, the Nite Ize QuikStand Mobile Device Stand and JOBY GripTight One Micro Stand. Right off the bat, you can already tell how much smaller both are compared to the Universal Airplane Phone Mount. Nite Ize’s solution can even fit inside a wallet’s card slot, while JOBY’s device is genuinely pocketable.

The comparison seems lopsided in favor of these two challengers. However, both of them are tripods, not mounts. Yes, the GripTight One Micro Stand does use a clamp, but neither tripods attach to a tray table and instead require placement on an even surface. This means you’ll have to have your table folded down, leaving you with less leg room and bending your neck to watch your favorite shows, unlike with the Universal Airplane Phone Mount.

So while you have to contend with the bulk and plastic construction of Perilogic’s Universal Airplane Phone Mount, it is undoubtedly a very ergonomic choice. It’s less fatiguing on the neck when the screen you’re watching is eye-level. As long as you’re okay with the squeaking, this is a great mount to keep on hand for long flights.

Get your questions about the Perilogics Universal Airplane Phone Mount answered from our team and the Pro Community right here on the page. Plus, join discussions with other members about gear, guides, and more. 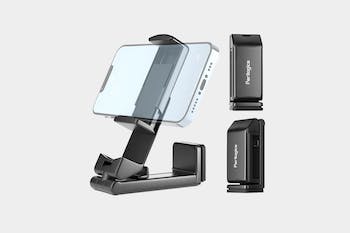