The Bellroy Oslo Backpack’s magnetic Fidlock opening is fast and secure, though the shoulder straps’ soft nylon twist too easily.

Bellroy makes some of the most easily identifiable travel gear out there. Their typical pastel colorways garnished with leather bits really stand out among a sea flooded with shades of gray. If you’re looking for a bag that feels more at home in an art gallery than the urban jungle, Bellroy’s a safe bet. We can also see Bellroy’s style shared among their lineup, and we think this has never been more apparent than with the Melbourne, Apex, and—the subject of this review—the Oslo Backpack.

We don’t need to ring up the DNA testing facility for this one. Bellroy clearly had a design in mind and decided to trickle it among the three, with the Oslo being the most conservative. It’s much more conventional, less daring than the Melbourne and the Apex in terms of function. Mind you, sticking with convention doesn’t make a bag less capable—as the saying goes, if it’s not broken, don’t fix it. It still has all the hallmarks that make a Bellroy backpack a Bellroy backpack. We’ll touch on all that and more, so let’s dive in.

Notice how we used the word “touch”? That’s because it’s a key part of getting a good impression of any bag. In the case of the Oslo, the main fabric feels very thick, durable, and somewhat crunchy. Pressing the fabric in causes an audible crackle, which is a good indicator that this isn’t just some random fabric they found lying around the warehouse. No, this is Baida Nylon, and it’s 100% recycled, meaning it puts a smile on mother earth’s—and our—face.

The colorway we have is called Bronze—a familiar color that we’ve seen on their other gear. We’re usually more partial to black colorways for reasons of being easily matched with other colors (we have varying wardrobes here). The good news is there are other colorways available at the time of writing, namely Charcoal and Melbourne Black. Keep in mind that those two use different fabrics: Canva Weave and Fine Weave, respectively, and they’re both 100% recycled.

On the whole, the Oslo looks more rounded and simpler than its siblings, the Melbourne and Apex backpacks. That’s because the Oslo has a more conventional top loader-style opening, whereas the Apex and Melbourne have unraveling main compartments. The result is that the Oslo resembles a classic knapsack, with only a lone strap terminating on a leather logo. Looks are subjective, and the minimalist design may not be everyone’s cup of tea. To our eyes, it does have its charm, and it’s definitely starting to grow on us.

Everything feels just right with the Oslo. We’re particularly keen on the magnetic Fidlock closure on the main compartment’s flap. Let’s admit it, magnets are neat, and the satisfying tactile feeling you get from using them is unlike anything else. Oh, and despite being a single magnet, this one’s more dependable than the dual magnets on the Melbourne. Before we forget, there is one zipper on the Oslo, and it’s a YKK-branded one. It’s reliable, doesn’t snag, glides smoothly with just enough resistance—as expected of a YKK zipper. Do we really need to say more?

One of the more unique-looking features of the Oslo is its shoulder straps. More specifically, it’s the way they are anchored to the bag that’s interesting. Instead of being stitched directly to the main bag, the Oslo uses thinner and softer nylon straps to connect the shoulder straps. You can check out the closeup below to see what we mean. This allows for a greater degree of movement for the straps, though it’s a bit of a double-edged sword.

Let’s first get into the cons of the shoulder straps. First of all, the soft nylon anchors make them more prone to twisting. Whenever we set the Oslo down, we always get a feeling that we’ll come back to it with one of the straps upturned. It’s a mild inconvenience at worst, but it’s one that we definitely notice when it does happen. Other backpacks’ stiffer shoulder straps are less prone to this, so it’s an issue that’s fairly easy to make a note of.

Another issue is that the strap adjusters slowly but surely slip over time. Now, to be fair, the Oslo isn’t the worst offender to exhibit this type of problem. We’ve had other bags with adjusters that slip after a day’s use. The Oslo’s adjusters slip much slower, but we wish it didn’t happen at all.

Despite these two issues, the good news is that the Oslo is still a comfortable backpack to carry. Since the shoulder straps are mounted on soft, flexible nylon, they move more easily. Even when we’re weaving about in a crowded place, we don’t feel dragged down by the straps. It feels a lot more natural—like we’re wearing the straps rather than the straps dictating our movement.

We noticed something in Bellroy’s claim about the back panel being mesh. Upon careful inspection (i.e., looking more closely), the material is typical fabric. It’s a different fabric than the Baida Nylon covering the majority of the Oslo, or at the very least a thicker version of it. It’s definitely not the type of mesh that we’re used to seeing. That said, it’s not like the back panel is uncomfortable to rest against in any way. It’s still relatively chill, although it would probably feel a bit more toasty in the summer.

Other than the shoulder straps, there aren’t many extras for the harness system. There’s a top handle for hanging and quickly shifting the bag around, but nothing else. There’s no external water bottle pocket, no sternum strap, and no hip belt. That’s okay, though, as we feel that the padded shoulder straps sufficiently cope with the 16-liter capacity.

Like the Apex and the Melbourne, the Oslo also has a side pocket, though only one. It’s on the right side of the bag, and it shares a similar problem to its siblings: tightness. As we pack up the Oslo with more and more gear, the main compartment starts to push into this side pocket, robbing it of space. This issue is slightly compounded by the fact that the main opening is shrouded by fabric.

This is great for weather resistance and security. However, we find that the shroud also affects how we access the pocket. The zipper is embedded into the fabric, making us fish for it each time. We don’t mean to exaggerate the problem because, again, this is one of those issues that is small but noticeable. Silver lining: the key clip here is the same one on the Apex. It still uses the thin ribbon we dislike, but at least it hasn’t jammed on the zipper.

The space inside the pocket is fairly large, that is, if we carefully manage the main compartment. We’re able to stuff our smartphone (iPhone XR) and thick leather wallet inside, along with our set of house and car keys.

There’s definitely a tradeoff in having the quick-grab pocket on the side as opposed to the front. On the one hand, it preserves the clean looks of the Oslo. On the other hand, a bulging main compartment makes it prone to space issues. It’s a case of style over practicality, one which we’ll leave you to decide if it’s worth it.

Now we arrive at the main compartment, and this is where the Oslo distinguishes itself from the Melbourne and the Apex. It opens through a top flap that’s secured by a single Fidlock magnet, which means it slots in like a button, unlike the Melbourne’s two magnets. This prevents it from popping open if a sudden jolt pulls the flap upwards. In other words, it’s very secure, with the added benefit of being quick since it’s magnetic. But just like the Melbourne, the flap’s not adjustable, so the volume’s pretty much fixed in place.

Thankfully, it’s not like the Oslo’s starved for space. The top-down style of loading makes the bag feel a lot roomier. Plus, since the body is much more straight than the trapezoidal shape of the Apex, stacking items together is a lot easier. We’re able to fit a few packing cubes and a toiletry bag side by side. There’s a drop pocket to the side, which we use for our tech accessories. It also doubles as an internal water bottle pocket that fits our 21-ounce Hydro Flask.

The main compartment’s organization doesn’t stop there. Towards the back is the built-in laptop sleeve, which fits our 13-inch MacBook Pro. It’s well-padded at the front as well as the back, so it’s protected in both directions. The liner fabric for the sleeve is pretty soft too, almost felt-like, so even bare metal laptops like Apple’s won’t get scratched up. Lastly, there’s an A5-sized slip pocket in front. Notebooks fit just fine, and so do e-book readers like an Amazon Kindle.

As a 16-liter backpack for everyday use, the Oslo is in the camp of “style first, function second.” Fortunately, the function isn’t far behind. In fact, it’s neck in neck with style, all things considered. We’re glad that our time with the Oslo has fewer headaches compared to our time with the Melbourne and the Apex. In a way, the Oslo is the more solid overall backpack among the trio, and Bellroy did a good job with it.

Get your questions about the Bellroy Oslo Backpack answered from our team and the Pro Community right here on the page. Plus, join discussions with other members about gear, guides, and more. 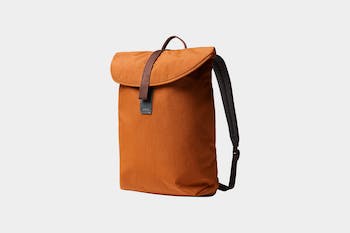