The Aer Packing Cubes’ used clothing compartment keeps your threads cleverly separated, though we wish there was a size smaller than the 6-liter cube.

Getting organized just before a long-awaited trip can either be a relaxing ritual or a get-psyched routine. It’s the lead-up to a well-earned vacation, so it’s an activity we ourselves find enjoyable in a way. One of our favorite tools is packing cubes, which turns packing into a sort of mini-game of Tetris. There’s something oddly satisfying when the cubes fit together nicely and every inch of space is accounted for.

Aer’s no stranger to packing cubes; they’ve already had a previous go at it with their original Packing Cube (V1). This time, Aer’s three sizes come with the signature build quality and style they’re known for, plus a clever feature for after you’ve used the clothes you’ve packed. Interested? Let’s take a tour and see what’s more to like or dislike.

Those accustomed to Aer’s usual styling will find the sight of the Packing Cubes (V2) a familiar one—an all-black, no-frills, Batman-like aesthetic. If the Dark Knight ever found himself wanting to take a little vacation out of Gotham, the Packing Cubes (V2) won’t look out of place in his Bat-luggage. The blacked-out design is something Aer often sticks to, from their previous generation Packing Cube to gear like the Sling Bag 3 and Fit Pack 3.

Black is arguably one of the safest colors to work with because it matches punchier colors easily. If you have a red suitcase or a yellow backpack, black packing cubes won’t clash with it. For some, it might come across as too plain (even the logos don’t stand out too much), but it works for us.

What you can’t take away from Aer’s design is how reassuringly durable they feel. Since these are packing cubes, they’ve opted for light 80D CORDURA Ripstop Nylon. It’s ten deniers heavier than their V1’s nylon fabric but feels just as light, if not lighter. This being Ripstop, rips and tears don’t progressively worsen if the fabric gets snagged on sharp edges like the zipper elements on a suitcase or an uncapped pen left in a backpack.

Unfortunately, the Ripstop fabric does pick up dirt rather easily, and it’s quite noticeable against the fabric’s black color. Buffing the dirt out by hand doesn’t really do the trick, so some vigorous wiping with a damp cloth is a must instead. It’s something worth looking out for in case you accidentally spill instant coffee mix in your hotel room (that stuff gets everywhere) or if the built-in closet’s been left a bit dusty.

Not to be taken for granted are the trios of YKK zippers found on each of the cubes. They come with pulls of reasonable length for grabbing, and they operate smoothly—which they’ll need to since the large 14-liter cube has quite the large opening courtesy of the clamshell opening. That’s a lot of distance to cover for zippers, and the last thing you’ll want on a trip is a fight to get your clothes out.

As mentioned, the Packing Cubes come in three sizes: a large 14-liter one, a medium 10-liter, and a small 6-liter cube for a total of 30 liters if you decide to get one of each (at the time of writing, they’re separate purchases). The sizes are on the larger side of the packing cube spectrum; we’ve definitely seen smaller packing cubes than these.

This makes the Packing Cubes more suitable for travel backpacks like Aer’s own 33-liter Travel Pack 2, where space is abundant. The ease of putting them in and taking them out will depend on what bag you’re using. At this size, though, a bag with a wide opening is ideal. Fortunately, Aer’s equipped each cube with a low-profile handle so you can take them comfortably to a laundry room or from tent to tent.

For daypacks hovering around 20 liters, it might be a struggle to get two of the 6-liter cubes inside, though the rectangular shape might help keep one side vacant. We have the dimensions listed above for reference in case you want to scope things out with what bag you’re pairing these with. Still, the multiple sizes available with the V2 are a welcome option—we just wish there was one tier smaller that slotted below the 6-liter cube for added flexibility.

With great volume comes great capacity, though, and there was little to no struggle fitting even our thick wool jacket inside any of the cubes. The open clamshell design means all available space is readily visible once you flip the flap open. The interior is also lined with Ripstop but in a lighter gray color that aids visibility. This way, you won’t have to hunt too badly for a missing button or clip if it falls off your shirt.

If there was any nitpick here, the light Ripstop fabric struggles with maintaining the structure during packing. The cubes have a separate shell and liner, and the walls of the cubes tend to sag when they’re empty and need straightening up as you’re putting in the first few layers of clothes. That said, it’s a minor nitpick at best and an understandable one considering the benefits of using light Ripstop fabric.

One notable change from Aer’s original Packing Cube (V1) is the absence of a mesh front. It was a convenient feature that kept things breathable and visible when the cubes were closed. Of course, it also had its downsides, like forgoing complete coverage from outside elements and not being as strong as nylon. But the Packing Cubes (V2) do come with their own unique feature: a rear used clothing compartment.

Flip over to the back, and you’ll find another zipper guarding a horseshoe-style opening. This compartment is for your dirty and used clothes, or really anything you just want to keep separate. For example, you might want rolled-up underwear and rolled-up socks in separate compartments, but not necessarily separate cubes. Now, Aer hasn’t conquered the laws of physics, so the available volume remains the same. Thus, making full use of both compartments will require some space management.

It’s a rather clever feature that spares us from packing a separate cube just for dirty laundry. It’s a matter of packing clothes as you’d normally do, using them, and then depositing them in the rear compartment afterward. By the end of the trip, you should end up with roughly the same size packing cube as you started with.

Aer’s new take on packing cubes is a substantial step up from their original one. The inclusion of a dirty clothes compartment is a clever one that we feel makes all three sizes very functional. That said, we hope that Aer introduces a smaller size, maybe in the 4-liter range similar to the ones included with the Heimplanet Packing Cubes, which would make that game of Tetris even more exciting.

Get your questions about the Aer Packing Cubes (V2) answered from our team and the Pro Community right here on the page. Plus, join discussions with other members about gear, guides, and more. 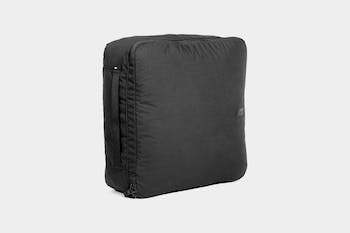