The Western Rise AirLoft Hooded Jacket looks clean and casual, with a near-seamless design and lightweight insulation. Most importantly, it performs well.

Western Rise’s description for the AirLoft Hooded Jacket ends with an interesting note. To quote, it says, “…you’ll forget you’re wearing it.” That’s kind of worrying, because we actually quite like the jacket, and we wouldn’t want to forget it that easily.

Okay, we do get what they mean by that; this is among the least overbearing jackets we’ve worn. From the styling and to the way it wears and keeps us warm, we can briefly describe it as “casual”—definitely not as hardcore as the thicker jackets we’ve reviewed, but not incapable by any means. Now, let’s get into the finer details of this jacket in the review below.

The AirLoft Hooded Jacket looks pretty clean from head to hip. There are no baffles or too many crisscrossing lines throughout the fabric. For the uninitiated, baffles are those puffy segments typically seen on cold-weather jackets. Think Marty McFly’s segmented red vest, for example. The segments contain the insulating fill, usually down or synthetic. But back to the AirLoft Hooded Jacket. Even in the areas where the fabric is stitched together, the seams are quite stealthy. Even the cuffs’ elastic is stitched inward and hidden from plain view. The jacket might even pass as a casual blazer if you take the hood out of the picture. From the looks alone, we can already surmise that this jacket isn’t going up against the heavyweight, fully-downed jackets scientists use at the north or south poles.

No, the AirLoft Hooded Jacket looks more at home cruising the chilly streets of downtown Manhattan in the morning. We dig the plain and clean aesthetics they’ve gone with—Western Rise has clearly taken the styling into consideration, which is what we’ve come to expect from the brand. The Blue Gray colorway may not be everyone’s first choice, though. Luckily, the jacket also comes in Olive or Black, which are just as tastefully subdued. But what’s underneath all that clean-looking fabric, anyway?

Both the outer shell and inner liner are 100% recycled polyester (hooray for eco-friendliness!). To be more precise, the exterior fabric is Primaflex 50D polyester, which feels fairly slick, as one would expect from a weather-resistant jacket. As for insulation, the stuffing inside doesn’t feel like traditional down. Instead, it’s Toray’s 3DeFX+ hollow-core 4-way stretch insulation. Okay, that’s a mouthful, but the important thing is that there’s substantial loft for retaining warmth. Toray themselves are keen to point out that the spiral shape and bulk of the fibers trap a lot of air. More air, they reckon, means more effective insulation. That said, pressing down on the fabric doesn’t feel like there’s nothing but air inside, and it does perform well enough—more on that later.

As for the hardware, the zippers on the AirLoft Hooded Jacket are all YKK VISLON. Yep, that means they’re made of plastic. But since these are still YKK zippers through and through, they glide along their elements well and without issue. Even the rear pocket’s zipper is fairly easy to undo despite the pocket’s placement.

Putting on the AirLoft Hooded Jacket for the first time feels non-cumbersome. The fit is just right, even for those of us with large frames. The bottom edge ends just below the belt, so it doesn’t feel like it’s dragging too low. Just keep in mind that this will vary depending on how well Western Rise’s sizing fits you. In terms of lightness, it’s in the same league as the Patagonia Nano Puff or its nearest peers like the Macro Puff Hoody and Micro Puff. It’s easy to move in and doesn’t feel stiff or overly stuffed at the joints.

On the other hand, the AirLoft Hooded Jacket’s insulation doesn’t feel as capable as the one used in Patagonia’s. If you’re looking for a jacket to take along a snow-laden path, you’ll have to look for something else. Mind you, that’s not to say that the AirLoft Hooded Jacket leaves you freezing. It’s definitely enough for when we use it in the wintery streets of Detroit when it’s above or around freezing temps—like we said: casual, but not arctic. Keep in mind your mileage may vary depending on your tolerances against the cold. Now, let’s get into the specific parts of this jacket.

There’s a pair of zippers along the main closure of the jacket, with one resting at the top and the other at the bottom to create a dual-zip system. Being able to zip the jacket from both ends means we can create airflow anywhere we want along the middle. We appreciate this flexibility as we no longer have to fully unzip the jacket just to keep our lower torso vented.

On the subject of zippers, one nice touch we dig is the zipper garage at the top end. The jacket does zip way above the typical collar line, so having this garage helps prevent chafing. The zippers themselves have metal pulls with heat-shrunk cords that prevent unnecessary jingly noises.

Putting on the hood is as simple as pulling it over your head. That said, it does feel quite tight when we have the jacket full zipped above the neck. You can get a clearer image of this with the picture above. Needless to say, if you’re using this in conjunction with a bike helmet, wearing it over the hood is the way to go. On the flip side, the hood can also be cinched down via a drawstring. It’s simple, but it does the job of making sure there’s minimal room for precipitation to get inside the jacket.

Next up are the pockets. There are four of them on the AirLoft Hooded Jacket: three exterior pockets and one inner pocket. The inner chest pocket has a fair amount of room inside for a smartphone, wallet, and passport. We’re just not quite sure about the durability. The polyester wears comfortably and has nice stretch, but it feels a little too soft to be used for the inner pocket.

There are two hand pockets on the outside; each goes as deep as the middle of the jacket. There is nothing to report here other than that both pockets are zippered and have enough space for quick-grab items and hand warmers. The positioning is a bit higher than we’d typically like. But for those wearing a backpack with a hip belt, the higher position may keep the pockets relatively unobstructed and more accessible.

Lastly, there’s a back pocket whose space spans the entire width of the jacket. We don’t use this pocket as much as the other ones since we usually carry a separate sling for anything bulky. This is also where the AirLoft Hooded Jacket stuffs into, and you can check out the process in the GIF below.

The process is simple: just stuff the jacket into the rear pocket like you’re turning it inside out. We don’t struggle with the compression as much as we do with other packable jackets or bags. The end result is a pillow-like form that’s not overly dense. It’s not as small as the Patagonia Micro Puff, though, so that would be a better choice if packing space is a priority.

Get your questions about the Western Rise AirLoft Hooded Jacket answered from our team and the Pro Community right here on the page. Plus, join discussions with other members about gear, guides, and more. 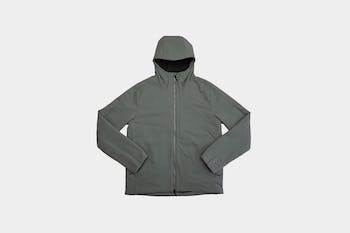 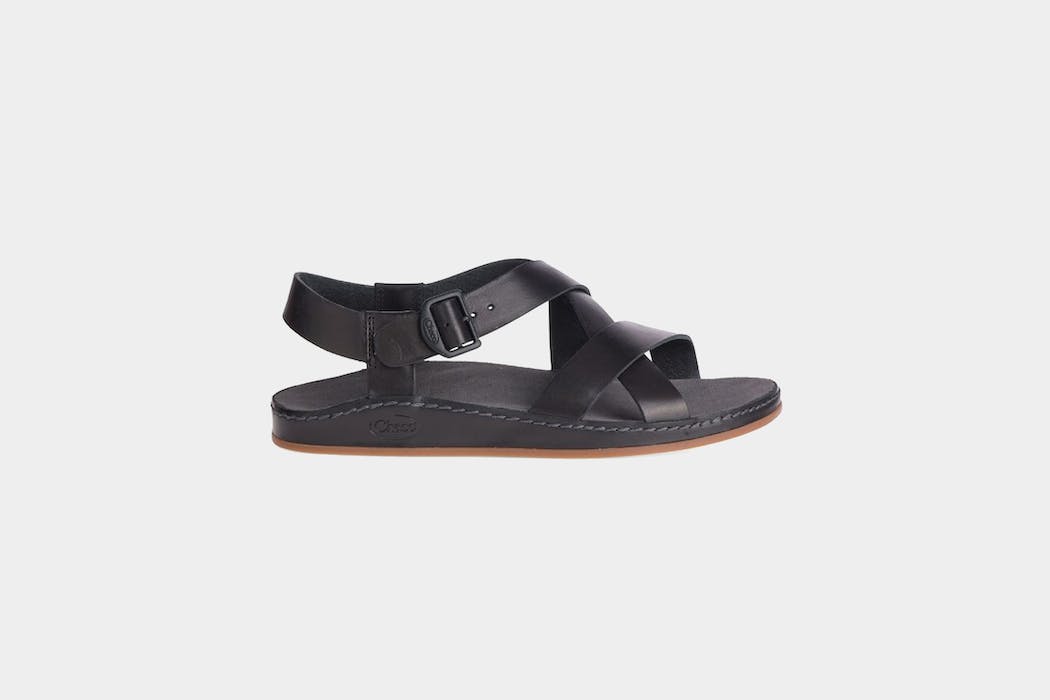 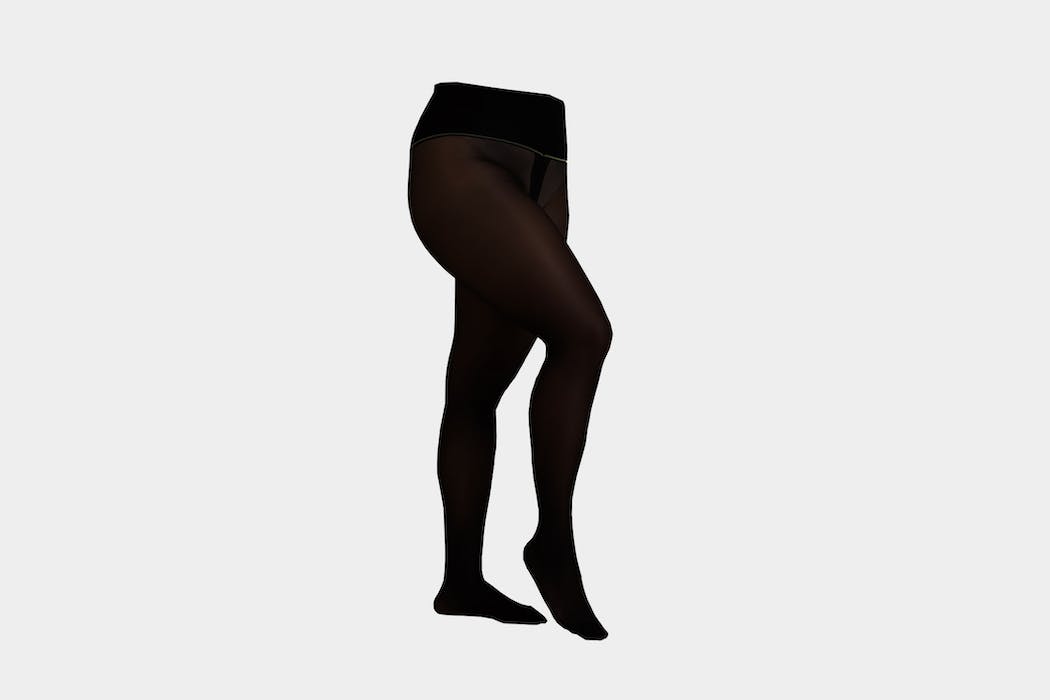 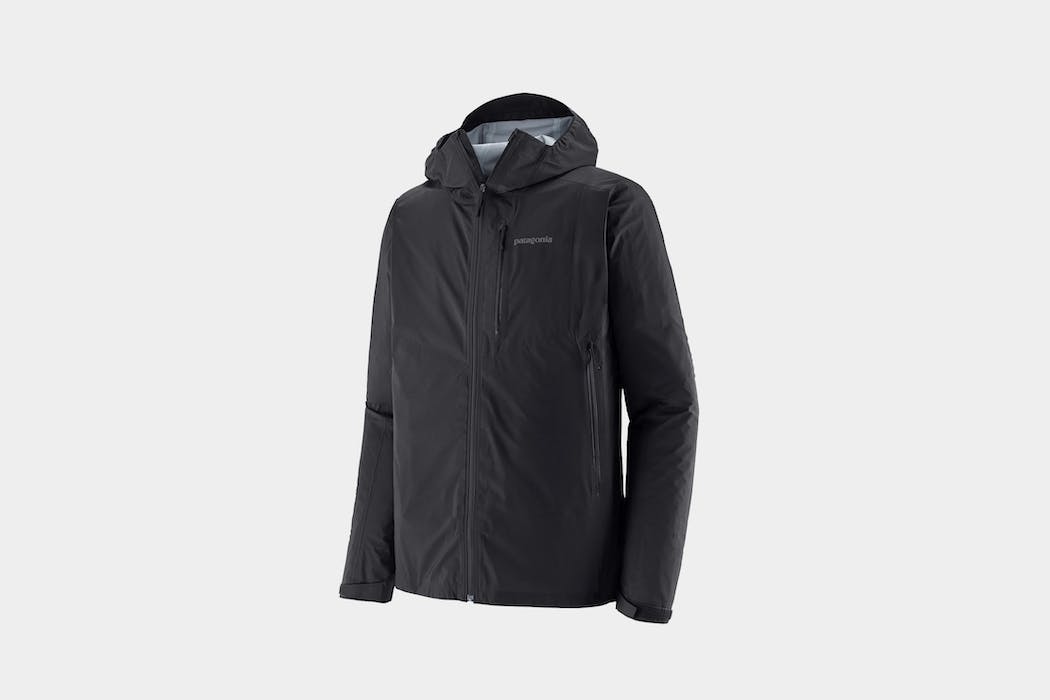 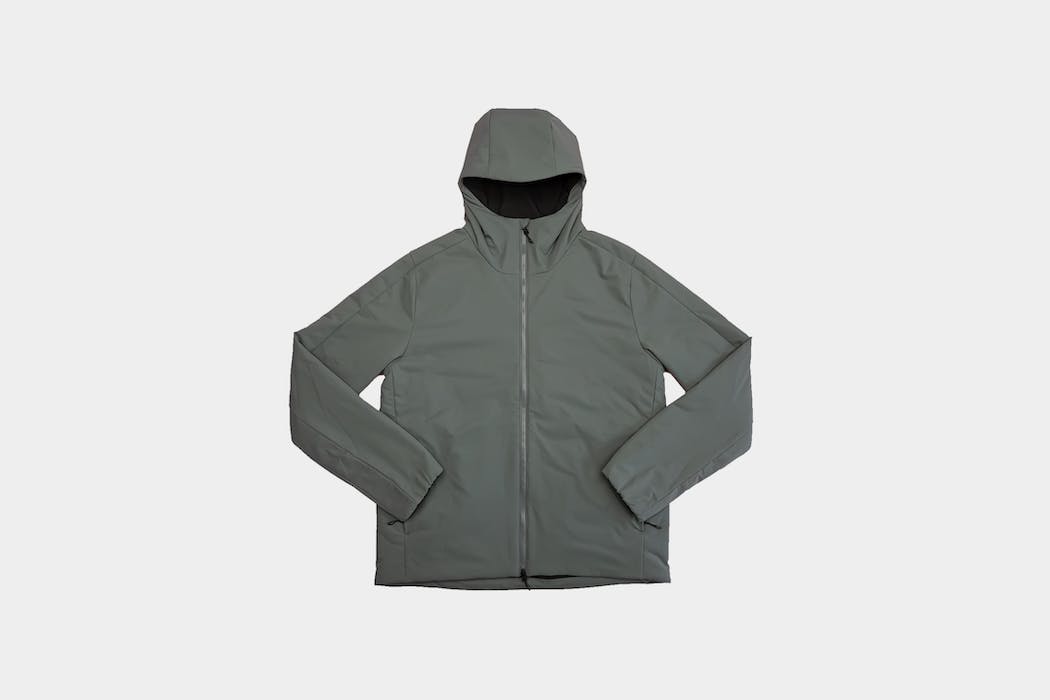