The WaterField Designs Packable Backpack feels and handles like a regular daypack, though at the cost of relative bulkiness when compressed.

Packable bags are super useful hacks for those #OneBag travel goals without actually limiting yourself to just one bag. Just toss one inside your main suitcase or travel backpack, and presto! You have something to use when you’re strolling through your new destination while the rolling luggage sits comfortably in your hotel room. Of course, each brand has its own take on the packable bag, which brings us to the WaterField Designs Packable Backpack.

Even though it has a very self-explanatory name, it hides its packable design well. Whereas some packable backpacks make do with easily wrinkled fabric to save weight and space, WaterField Designs’ Taslan fabric keeps the bag feeling and looking fairly pristine. However, the bag is still a packable backpack that comes with fewer creature comforts than regular daypacks. The question is: will you find enough things to like despite this? Well, let’s find out.

WaterField Designs’ styling is fairly minimal, leaning more towards sleek and classy. The sideways logo looks a bit peculiar at first, but we think it works. What strikes us the most is how well the bag hides its packable nature. We’ve reviewed a lot of packable bags, and more often than not, there’s a telltale sign that they’re packable. The most obvious sign would be the material, as most brands would opt for a lighter fabric like Ripstop nylon, which compresses well while offering durability. We’re not engineers or bag designers by any means, but we see the rationale behind the compromises and trade-offs of a packable design.

WaterField Designs, though, takes a less-than-typical approach. The outer shell is weather-resistant Taslan textile, coupled with a tricot mesh material underneath for added structure. Inside, there’s Ripstop nylon liner for an added layer of protection. Technical terms aside, the result speaks for itself; the backpack looks and carries almost as well as a regular daypack. However, there is a drawback to this amount of material, which we’ll get into later.

We’re sampling the Khaki colorway in this review, and the bright fabric has grown on us quite a bit. WaterField Designs calls it Khaki, but it’s actually much closer to a very light peach color. The other colorways available at the time of writing are darker, namely: Burgundy, Olive, and Black.

Hardware is courtesy of Duraflex, which means it’s reliable, and our testing of the shoulder straps confirms that. On the other hand, the zippers are not the usual YKK-branded ones WaterField Designs typically employ. The good news is that just because they’re not YKK doesn’t automatically mean they’re terrible. We’ve encountered no issues with them thus far, and they are weather-resistant, though they lack zipper garages to seal the deal.

The zipper pulls have holes in them for securing via travel padlocks. Unfortunately, since the holes are on the pulls and not on the slider themselves, it leaves a small-but-definitely-there gap. For the security-conscious, it’s something to watch out for since total security means keeping things out as much as keeping things in. No one wants to open their bags and suddenly find random trash squeezed through a hole.

On the outside, the Packable Backpack isn’t the most feature-rich bag out there. Naturally, since minimalism is the name of the game for packable bags, such bulky features like compression straps, padded handles, loops, and elaborate harness systems are a no-go. WaterField Designs isn’t an exception to this, though they’ve done a pretty good job of keeping the look and feel of the Packable Backpack nearly on par with typical daypacks.

The shoulder straps on the Packable Backpack are relatively capable, with mesh underneath to keep things cool and breathable on warmer days. The Duraflex hardware is full-sized and wouldn’t look out of place on bigger backpacks. WaterField Designs even thought to put strap keepers to keep the extra slack in check, so it doesn’t spoil the tasteful design. Granted, the padding is thin, but as a 16-liter packable bag, comfort was more than acceptable for us. Lastly, there’s a simple nylon loop between the straps for hanging the bag on hooks.

The Packable Backpack also has two deep water bottle pockets—a solid feature to have for anyone who takes hydration seriously (which should be everyone, really). Of course, even these pockets have some compromise. There’s no elastic or stretch, though we find their relative tightness sufficient to hold our 18-ounce YETI Rambler in place. Consequently, the bottles may cut into the main compartment’s space a little bit, depending on their size.

In its compressed form, the Packable Backpack shrinks down to the size of a small pouch, with a small loop for hanging. In comparison to other packable backpacks, WaterField Designs’ is relatively big. Here we have the Matador On-grid Packable Backpack and Mystery Ranch In and Out Packable Daypack next to it for comparison. Among the three, WaterField Designs’ is the biggest, and we can attribute that to its more regular daypack-like characteristics.

The Packable Backpack’s extra size is by no means a big issue if you’re just looking for something that fits inside a suitcase or travel backpack. But if you’re like us, who go the extra mile when it comes to planning out packing lists, shaving off every ounce wherever possible, then it’s not the most ideal solution.

Fortunately, the Packable Backpack does compress rather easily. It’s the standard procedure of laying the bag flat, folding, rolling, and stuffing it into its own pocket. Yep! The Packable Backpack doesn’t require a separate pouch for storage; it’s a self-contained packable bag. This is a good thing since it’s one less piece of gear to worry about and potentially lose.

Once fully deployed, the Packable Backpack has a total of three areas for organization: a front pocket, the main compartment, and an interior pocket. The front pocket opens from the side with a lone weather-resistant zipper. It’s a good orientation for swinging the bag around from the left shoulder. Inside, it’s just a bare pocket with a weather-resistant liner, and a fair amount of space for everyday carry items like a wallet and smartphone. There’s also a built-in carabiner-style key clip and a fairly good quality one at that.

The main compartment opens up horseshoe-style, and the size of the opening is more than enough relative to the bag’s 16-liter size. The Ripstop nylon liner isn’t too bad in terms of visibility, either, and we dig the extra durability it delivers. The space is mostly an empty bucket, which means you’ll have to supply your own pouches and packing cubes for organization.

Unfortunately, like most packable backpacks, this one doesn’t have a built-in laptop sleeve. However, WaterField Designs specifies that a 16-inch MacBook Pro can fit inside the Packable Backpack’s main compartment even with a protective sleeve. It just so happens that our MacBook Pro is a 16-inch model, and we use it with a dedicated sleeve. We tried it out, and yes, it does indeed fit. Being able to bring your laptop around when exploring a new city is a nice feature to have, instead of waiting to get back to the hotel room to get some inspired typing done.

Lastly, there’s also a pouch-like pocket inside the main compartment. This is for smaller items that aren’t necessarily quick-grab items. Smartphone chargers, dongles, and cables come to mind if you’re not fond of separate tech pouches, but it’s also great for some travel canisters of medicine. One thing to watch out for is that this pocket obscures laptops placed behind it. It’s kind of tricky to move out of the way, especially when it’s packed tightly and heavily. We’d avoid stuffing it with too much gear if laptop accessibility is a top priority.

The strength of WaterField Designs’ Packable Backpack lies in how well it feels like a regular daypack. The usage and looks are polished enough that we don’t feel too compromised in key areas whenever we use it. However, it’s still a packable bag at the end of the day, and the usual trade-offs are there if you look closely enough. But as far as packable bags come and go, the WaterField Designs’ Packable Backpack goes a step or two further to hide its weaknesses.

Get your questions about the WaterField Designs Packable Backpack answered from our team and the Pro Community right here on the page. Plus, join discussions with other members about gear, guides, and more. 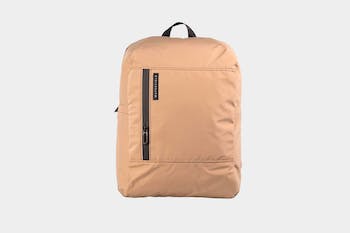