The Timbuk2 Packable Travel Tote isn’t the smallest packable tote out there, but its large size and luggage pass-through make it great for travel.

Here at Pack Hacker, we have deep respect for the humble tote bag. Sure it doesn’t often have a fleet of pockets, the most comprehensive harness system, nor the flashiest designs. For the most part, totes stay true to their purpose: a large sack that you can fill up with all your gear and two handles to hold on to. As cliche as it sounds, less really is sometimes more.

One of our favorite developments in the realm of tote bags (or bags in general) is being packable. In fact, one could argue that all totes are packable because of their simple and relatively thin construction. Timbuk2’s Packable Travel Tote takes the concept and beefs it up a bit. At 23 liters, it definitely has the capacity of a travel-focused tote. However, as we find out, it’s not quite as packable as we first thought it would be. Let’s see why.

Like we said earlier, most totes really don’t fall far from the tree in terms of design. That extends to the aesthetic aspects of the bag. The Packable Travel Tote has the slightly inverted trapezoid profile you’d expect from a tote. The corners are a bit rounded, giving it a more rotund appearance rather than a sharp and edgy one. The fabric’s wrinkled appearance is somewhat hidden by the all-black design, leaning more towards classy than farmer’s market-y.

For the most part, this design is very Timbuk2. We’ve taken a look at some of their other gear, and the Packable Travel Tote does share the urban look with them. If there was any doubt that this is a tote made by the brand, there’s a clearly visible but tastefully applied Timbuk2 logo at the front’s lower area—A pinch of white on a black canvas does make for a good, if not a bit subdued, aesthetic.

But enough about looks, what about substance? Well, Timbuk2 doesn’t say what exact fabric they’re using for the main shell. Its thickness is almost akin to that of low-denier nylon or polyester. What the brand does say is that this is a fully-wipeable material that’s easy to clean. Getting a good feel of the fabric, we noticed that it’s very crunchy. Not really a huge issue and more of an indicator of the Packable Travel Tote’s thicker-than-usual construction.

Unlike more barebones totes, the Packable Travel Tote has some hardware sprinkled around. The zippers are reliable YKK-branded ones, and the adjusters are equally reputable Duraflex hardware. We are fond of finding these brand names in travel gear as we usually never encounter problems with them—which is also the case on the Packable Travel Tote.

At the core of any tote bag are, of course, the tote handles. These are great because they can usually be carried in two different ways: by hand or by shoulder. In fact, it’s not uncommon for some backpacks to have built-in tote handles for those who prefer them. Bags like the QWSTION Day Tote and Osprey Arcane Tote Pack come to mind.

With the Packable Travel Tote’s 23-liter capacity, admittedly, we were looking for some beefier handles. Maybe some padding stitched in, or some movable pads were expected. However, the carrying experience is still overall a comfortable one. We had the tote relatively packed up with thick clothing to max out the capacity, but we never really felt that the handles were lacking in either handheld or shouldered mode.

A good nice-to-have feature of the Packable Travel Tote’s handles is the snap fastener in the middle. We’ve used a lot of tote bags over the years, and one of the issues we encounter with them is slipping. We’d have them on our shoulder, but the far side would tend to slip down over time. This is further exacerbated if you have droopy shoulders or are wearing smooth clothing like silk. Thanks to the simple addition of a snap fastener, that’s less of an issue with the Packable Travel Tote.

It’s pretty comfortable to carry by hand as well. The handles are on the longer side but not so long that they drag along the floor. Those around 5’6” among our crew had no issue carrying the tote around. However, those who are shorter or have longer arms may. Having the tote not drag along the floor doesn’t sound too impressive. But considering that this is a relatively large 23-liter tote, it’s worth mentioning.

Lastly, the Packable Travel Tote has one feature that doubles down on its travel aspect: a luggage pass-through. Behind the bag, the horizontal strap can be loosened or tightened via the Duraflex adjuster mentioned earlier. This allows the bag to sit better on a roller even when it’s bloated with bulky clothing. So yes, no more fiddling with the tote handles, trying to use them as a luggage pass-through.

Something we appreciate with the Packable Travel Tote is its front pocket. The side is easily accessible by hand when we’re shouldering a tote, making it a good spot for a quick-grab pocket. Simply unzip by pulling on the nylon zipper pull, and voila! All your everyday carry items are within your hands’ reach. It has a fair amount of volume, too, as we’re able to fit our smartphone and thick wallet inside with extra room to spare. Speaking of room to spare, the main compartment has that in spades—as is usually the case with tote bags.

The main compartment is guarded by a single zipper—easy enough to open, but then we come to a tote’s first weakness: lack of structure. Even with the thicker than usual fabric, the Packable Travel Tote still won’t stand on its own. Combined with the large capacity, the technique for packing this tote is definitely to lay it on its side and then start putting gear in.

The inner liner is a bright grey, which makes interior visibility quite good despite the tote’s depth. One thing to note about the liner is that it’s quite baggy, making packing a tad trickier than a tote that doesn’t have a liner. We usually press the fabric in first just to max out the space before we put our gear inside. Otherwise, the liner can make packing a bit overwhelming.

On the other hand, the available space courtesy of the large volume is definitely there. We’re able to fit a large sweater, a few packing cubes, in addition to a small toiletry bag, or a 40-ounce bottle if hydration is the priority over hygiene. There is room left over to fit our laptop. Just keep in mind that you’ll want a separate laptop sleeve, as the Packable Travel Tote lacks any padding for protection.

For smaller items, there’s also a small pouch-style pocket with a built-in key clip. The key clip itself is attached to a fairly long leash. To put it in another way, the leash is long enough that we don’t have to detach our keys to unlock doors. A small but honestly underrated feature in the realm of built-in key clips.

Okay, we’ve covered the “Travel” and “Tote” in the name, but what puts the “Packable” in this tote? Indeed, as some of you might have guessed already, the tote packs into the inner pocket. The process of compression is fairly straightforward: turn the inner pocket inside out, fold the straps and sides in to fit the pocket’s width, then roll and stuff into said pocket. As a neat bonus, the key clip hooks into a small loop on the opposite side, allowing it to act as a handle for your now-compressed tote.

The Packable Travel Tote is not the smallest packable tote out there. But on the flip side, there’s a correspondingly large amount of volume available—the baggy liner notwithstanding. Coupled with the capable tote handles and handy luggage pass-through, it’s a capable tote bag to take traveling.

Get your questions about the Timbuk2 Packable Travel Tote answered from our team and the Pro Community right here on the page. Plus, join discussions with other members about gear, guides, and more. 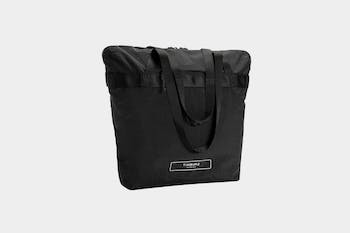