The safety features on Pacsafe’s Vibe 100 Anti-Theft Hip Pack are subtle and work quite well while on the move, although they take some getting used to.

Pacsafe offers a wide variety of travel packs and slings that provide more built-in security than many other companies on the market. We’ve highly reviewed bags like their Venturesafe X Anti-Theft Sling Pack but were a little let down by the Stylesafe Anti-Theft Sling Pack. We’re curious how the Vibe 100 Anti-Theft Hip Pack stacks up against the good and the only okay Pacsafe gear we have tested in the past. Let’s find out!

Kicking things off with the exterior materials, we’ve got a 210D Nylon projection ripstop. It feels durable and sheds light water, but the interior begins to feel wet after 15 minutes in the rain. Our model is the Jet Black colorway, which we think looks very sleek. Other parts of the pack aren’t so minimal, but we’ll move on to that in a bit.

Camo and Tan colorways are available, which are made with 450D and 750D recycled polyester, respectively. Each hip pack features an eXomesh slashguard within the shell material, which prevents someone from cutting open the bag to access its contents. The material itself isn’t slash-proof, but there’s wire inside the pack designed to stop sharp objects in their tracks. It feels about the thickness of chickenwire but is durable enough to withstand a pocketknife. We didn’t want to ruin our pack by testing it, but we think it’s a good include for those who worry about theft.

This sling comes in at 4 liters, which is nicely sized for daily trips to and from your hotel and Airbnb but not much more. You aren’t going to be able to shove a ton of gear inside for a full-day-long adventure, but it’s got you covered for a walk around the local market or to the beach.

Moving on to the zippers, this is where things start to get exciting. You get a special prize if we say the word zipper more than ten times in the next two paragraphs! Be sure to keep count. We’ve got a YKK #5 front pocket zipper and a YKK #8 main compartment zipper. As smooth and capable as these zippers are, the pulls have all the action. Pacsafe calls the locking mechanism on the zippers a Roobar sport locking system.

If you were counting, that’s 12 mentions of the word zipper. Stay tuned for your prize! The Roobar sport locking system is more of a deterrent than a lock because if someone wants to get into your pack, they will, but it does offer a fair amount of security and peace of mind. It can be a little awkward to use when you first get the pack, especially if you haven’t used something like it before, but after a few days, you get the hang of it, and it’s like second nature.

When not locked, the zipper pulls are pretty loud. They’re made of metal and jangle against one another. When locked, they hardly make a peep. This may seem small, but it is loud when they aren’t locked away.

The strap has security measures as well, though it may not look like it at first glance. The strap itself is pretty basic and lacks padding or aeration. It isn’t uncomfortable, most likely due to the small size of the pack, but in extended use, we do find ourselves adjusting it to try and find a more comfortable fit.

There is a Carrysafe slashguard strap similar to the eXomesh we mentioned earlier. There are two wires running through the strap that, when slashed with a knife, will prevent a clear cut, saving your pack from being snatched. You really can’t feel that they’re there—only a little extra thickness—but we’ll take Pacsafe’s word for it on this one.

The clasp on the hip pack is unique as well. It’s called a PopNLock security clip, and it not only locks but has the option to add an additional lock to prevent it from opening even when it isn’t secured. There’s a small knob, like those on an old-school TV, on the top with two options. One is an open lock and the other is a closed lock. When in the locked position, the clasp is gated and won’t open. When in the unlocked position, you just need to push down on the knob, and it will release and open.

It’s simple enough, but the idea is that it will slow down someone on a crowded street while they try to take your pack. If this isn’t enough protection for you, the bottom of the clasp has a small metal loop. When a lock is placed in this loop, it prevents the clasp from opening as it slides up through a cylinder, and a lock won’t fit through it. If you don’t have a lock, you could also loop a zip tie around it a few times for a similar effect.

The back panel doesn’t offer any security features, but it’s quite comfortable. It is lightly padded and aerated, which keeps things cool. The aeration goes onto the straps a little, which we like a lot. There are little fabric tabs that connect the pack to the strap, which we like.

On the side with the clasp, the transition fabric isn’t connected all the way because the clasp is there. The transition can get caught up and curl, which you can feel when wearing it. It isn’t terribly uncomfortable, but it is noticeable. It’s easy to fix, but we think it’s worth noting.

The strap has elastic strapper keepers, which we are always fans of. These models seem to require quite a few loops of fabric to be tight, but even with just one, it holds it pretty well.

Don’t worry, we haven’t forgotten about your prize. We’re just making you wait for it!

Moving on to the interior, we’ve got a 200D polyester material. The interior is light gray on the Jet Black colorway we have on hand, which makes it easy to find gear inside. There isn’t much worse than digging through what feels like an endless pack for a tiny headphone dongle, and this inclusion makes it a little easier.

The front pocket is a good fit for smaller items, as it isn’t that big. A phone, wallet, or set of keys does well here, and the included key clip ensures that your keys are always in the same place. The clip is plastic, but it’s very rigid and feels durable. If you have the main compartment fully packed, getting things in and out of this pock can be hard. It isn’t a huge deal, but we think it’s important to note.

Moving into the main compartment, we’re impressed with the amount of space available in such a small sling. When empty, the bottom of the sling folds in so it can compress ever so slightly. When packed out, the bottom is flat, and there’s ample space for various sized items, like headphones or a small camera.

A liner pocket on the backside can fit up to a 7-inch tablet. Finding a way to fit a tablet or eReader in with other gear can be challenging, so having a dedicated spot for it is satisfying. On the other side of the compartment is a pocket with an RFID Safe tag. Based on Pacsafe’s information, we aren’t sure if it’s just that pocket that is RFID protected or if it’s the whole pack. Either way, it’s nice to have the added bit of protection from radio frequency identification if that’s a concern.

We’ve found a handful few loose threads on the pack in testing, which is a little disappointing. They aren’t integral to the pack’s design, but it isn’t a great look. A quick snip with scissors takes care of them, though.

Overall, we like the size and quality of the Vibe 100 Anti-Theft Hip Pack. The security features don’t inhibit use or comfort, and we dig the overall look of the pack. The loose threads are a bit of a bummer, but overall, we don’t have too many complaints. We’ll see you next time!

Oh, yeah…your prize. Since there isn’t much we can give you in terms of a physical reward, we figure it should come in the form of a fun fact. Did you know that the only known mammal other than humans to go looking for spicy food is the treeshrew? It’s native to Asia and is oddly cute…and spicy.

Get your questions about the Pacsafe Vibe 100 Anti-Theft Hip Pack answered from our team and the Pro Community right here on the page. Plus, join discussions with other members about gear, guides, and more. 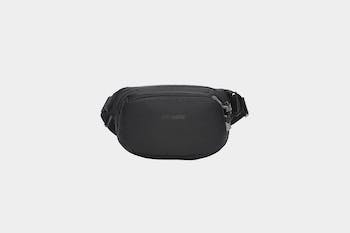