The Moment Crossbody Wallet has the capacity of an everyday mini sling for casual and formal events alike, though a few quirks take some getting used to.

Get up to 20% off Moment • Join Pack Hacker Pro

There comes a time when one realizes that the pockets one wears just aren’t enough for the number of items one carries. Think about it: There’s cash, credit cards, transit cards, IDs, keys, and maybe even some toiletries (there’s no shame in keeping fresh all the time, okay?). It’s even more painful when clothes straight up don’t come with any pockets at all—yikes. Whether it’s capacity or the lack thereof, some wallets can be their own standalone bag now.

Moment’s Crossbody Wallet is one such wallet. You can either carry it by the removable wrist strap or by the included crossbody strap—the latter mini sling mode being our preferred means of carry. The two-way versatility is nice, but the wallet has the unusual quirk of going upside down from time to time because of its D-rings’ position. That said, it’s an otherwise solid wallet, so let’s check out how it is in actual use.

The Crossbody doesn’t stand out from the crowd—at least in this colorway. It’s a pretty classy-looking wallet, one that we can confidently take to formal functions, the type where style follows the “less is more” rule. The wallet’s aesthetic appeal lies with the leather fabric since the rest of the accents (hardware, stitching, straps, and debossed logo) follow the black-on-black color scheme. Plus, black is very easy to match with other colors. Whether you’re rocking a red dress for a black-tie event or a simple t-shirt and jeans combo for a grocery run, the Crossbody works both ways.

There’s also a colorway option called Natural Leather, which is basically a tan-colored version of our sample. Both use American-made Horween leather, while the third colorway option of Black Ripstop uses ripstop nylon. The fabric has a visible grid pattern, giving it that signature ripstop look. Love it or hate it, ripstop fabric brings with it the benefit of stopping tears within its reinforced squares. We’ve seen this in action in other bags, so we know the feature works.

Interestingly, the ripstop version uses reverse coil zippers, while the leather ones make do with regular ones. As a quick reminder, reverse coil zips have the benefit of being more water-resistant. Both versions exhibit some stickiness, but it’s much more pronounced on our leather version. Thankfully, that’s the extent of our gripes regarding them, and neither has experienced any noteworthy jamming issues—something that’s especially annoying if it happens to a wallet. No one likes to hold up the line at the checkout.

Overall build quality is relatively solid as far as wallets come and go. However, one potential deal-breaker is the rather plasticky clips the straps come with. They remind us of the old plastic key clips Aer had on their older gear. They get the job done, but they don’t feel as well-made as the rest of the bag, and it’s the same case for the Crossbody. That said, the clips haven’t broken on our sample, so they get a pass from us.

Despite the “wallet” designation, the Crossbody isn’t something that lives exclusively in your pocket. Instead, you carry it by the removable wrist strap or use the included crossbody strap. This flexibility is great because it gives you a choice to either put it in your main bag when traveling or use it as a standalone mini sling for everyday use. It’s a similar use case to the NOMATIC’s Access Pouch.

The straps themselves are made of a paracord-like material, minus the stretchiness. Moment specifically calls them “rope and crossbody straps.” They certainly do resemble ropes upon closer inspection, courtesy of their braided construction. It’s a simple design, especially the crossbody strap. It’s made up of two ropes overlapping and tied to each other. For length adjustment, the two parts simply slide closer or away from their ends, their large knots preventing the strap from fully unraveling.

Comfort-wise, both straps work well given the wallet’s size and intended purpose. It’s also worth noting that the straps are connected to their clips on hinges, allowing them to move and adjust more freely.

We were a bit skeptical at first because of the crossbody strap’s thinness, but thankfully it doesn’t dig in due to the wallet’s light weight. The bigger factor when it comes to comfort is the D-rings’ centered position. Whenever we try to wear the Crossbody in sling mode, it tends to rotate along its horizontal axis. It’s a weird quirk, one that bothers us from time to time and makes us wish that the D-rings were just a bit higher to offset the balance.

In terms of size and capacity, the Crossbody can hold more than just cash and cards. There are two compartments—a front and main compartment—plus a rear slip pocket for quick-stash items. It’s a good three-way mix of pockets, each having a distinct purpose and advantages when it comes to accessibility.

We’ve already mentioned the Crossbody’s unfortunate going-upside-down quirk. Fortunately, the rear stash pocket is oriented sideways, meaning its opening is also facing sideways. This lets us put something super fragile, like our iPhone 13, inside the tight-fitting pocket, and as it’s a secure fit, we’re confident that it won’t fall out even if the whole wallet twists.

The rear pocket’s opening is also diagonally cut, so pulling out items like a smartphone or a power bank is fairly easy.

The front pocket sticks out from the wallet’s main structure, giving it some independent volume. Inside, two things immediately stand out: the gray microfiber liner and the middle divider. The liner fabric’s relatively light color means interior visibility remains acceptable, even during daytime downcast weather, and its soft texture minimizes scratches even on PVC-based cards.

The middle divider provides a means of separation for small items and accessories. Our Apple AirPods case fits either side well, leaving the other open for some spare change or transit cards. However, we do sometimes notice that the divider’s fabric catches on the zipper because it’s so close to the opening. Thankfully, the fabric hasn’t been damaged, and a little rearranging helps the zipper pass.

As for the main compartment, this is where the bulk of our everyday carry items go. If we haven’t mentioned it already, the Crossbody does have more than enough space for everyday carry items. Our typical wallet carry-ons like cash, cards, and IDs can all live in the three liner pockets comprised of two narrow pockets flanking a wide one.

This leaves the rest of the open space ready for other bulkier items, including our iPhone 13, if having it in the slip pocket is too risky. Keep in mind that the Crossbody’s slim profile still limits gear to those with equally slim designs. For context, our iPhone 13 takes about half of the wallet’s depth, so stacking items (like makeup for on-the-go touch-ups) next to it can lead to a lumpy look. We definitely spend some time wiggling things around to ensure that doesn’t happen. As usual, packing strategically with smaller gear like this (mini slings, pouches, etc.) is always the best practice.

The Crossbody’s flexibility of being both a wallet and a mini sling makes it useful for travel and everyday use cases. It’s the type of gear that can be used for most occasions and not just be banished to live in the closet for most of its lifetime. That said, using the shoulder strap can be clunky because of the D-rings; we think Moment can polish the execution a bit more. Still, we like that the option’s there at all—even when it does have its quirky moments.

Get your questions about the Moment Crossbody Wallet answered from our team and the Pro Community right here on the page. Plus, join discussions with other members about gear, guides, and more. 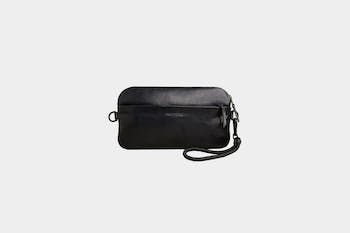