Get up to 15% off ALPAKA • Join Pack Hacker Pro

In our review of ALPAKA’s Atom X Sling, we noted how it could fit a Nintendo Switch despite its slim profile, which ticks many of the right boxes. However, the slim profile is a bit limiting for bulkier gear. What good is a Switch if we can’t hook it up to a large battery bank for countless hours of co-op fun?

The Go Sling Mini is bigger than the Atom X Sling. Featuring a choice of either Kodra HT nylon or X-Pac fabric, it also feels solid and wears like a bag with a much lower profile. It even comes with a magnetic Fidlock quick-release buckle—the cherry on top for a lot of contemporary slings. Everything looks and sounds good, but let’s see if there are any weaknesses in its design.

The Go Sling Mini has a sense of familiarity, probably because it looks and feels like the typical urban-themed sling. It shares the same vibe we get from the likes of NOMATIC’s Navigator Sling 1L and Aer City Sling 2; it’s for the city dweller exploring a concrete jungle. Admittedly, the all-black aesthetic doesn’t do much to stand out from the sea of bags donning shades of gray. But perhaps that’s the point. Security and safety are a priority for digital nomads in the city, and stealthy black helps achieve that.

There’s no skirting around it, though: the Go Sling Mini is rather large despite the name, though it’s more wide than deep. The look only becomes more apparent on wearers with smaller builds. Mind you, it’s nowhere near as big as Chrome Industries’ Mini Kadet; the discrepancy in naming is less pronounced here. But enough about the looks, what about the substance?

At the time of writing, ALPAKA offers the Go Sling Mini in two colorways, each having a different main fabric. The one we’re sampling for this review has a 500D Kodra HT nylon outer shell with a DWR (durable water repellent) finish. It’s not the heaviest denier of nylon we’ve seen on a sling, but it’s more than thick enough for the wear and tear of our daily use. Our only gripe with the fabric is how easily it picks up dirt and pet hair. Thankfully, it’s a gripe concerning the superficial and not quality; it’d be a different story if we found loose threads or a tear.

The Go Sling Mini is also available in a limited edition Dark Multicam colorway. This one swaps out the Kodra HT for X-Pac X50 with a camouflage pattern. Even the interior liner is changed to a bright orange one, though both versions still use similar 210D ripstop nylon. It’s definitely the more eye-catching between the two colorways, and the X-Pac fabric should fare better against accidental splashes compared to the Kodra HT.

The zippers on the Go Sling Mini are unbranded reverse coil, giving them a touch of weather resistance. This added layer of protection makes them feel a bit sticky when unzipping. Fortunately, apart from this small issue, they haven’t locked up or anything catastrophic like that. Additionally, the Go Sling Mini also features a magnetic Fidlock buckle on its strap. We dig the tactile feel magnetic buckles have, though they’re not necessarily our favorite since side-release types are simpler to use. Nevertheless, it works and feels just as high quality as the rest of the sling.

The main strap on the Go Sling Mini is made out of seat belt-like material that feels slicker than the Kodra HT. It’s easy to move around our shoulders while its wideness distributes the weight fairly evenly. The Go Sling Mini itself sits close to the user thanks to its low-profile shape. We find the overall carrying experience a comfortable one, and that’s taking into account its relatively large size.

That said, we do struggle with the strap’s adjustment. The adjusters have a toothed stopper built-in for extra grip. Combined with the strap’s wide surface area, adjusting the length is tough while wearing the sling. This is the type where we have to take it off, make adjustments, try it out, and make further adjustments if necessary.

This isn’t a huge deal if you have a pretty steady day-to-day load. But if you’re frequently changing what you’re carrying or the thickness of your clothes, then you’ll make just as many adjustments. Not to mention that the problem becomes more evident if you’re switching between the Go Sling’s different carry modes, namely waist pack, crossbody, and over the shoulder.

The silver lining here is that the magnetic Fidlock buckle makes it super easy to take the sling off. If you’ve ever found yourself burdened with multiple bags worn at once, you know getting one of those straps over your head can lead to a tangled mess—quick-release buckles work around that. Granted, this one looks bulky and complicated for a buckle, but it’s pretty easy to use. A firm tug on the pull string unclasps the halves quickly. It sounds too easy, but it’s a fiddly-looking system to the untrained eye (read: thieves).

The Go Sling Mini is also compatible with ALPAKA’s HUB accessories. Simply put, HUB is the brand’s magnetic ecosystem of buckles, D-rings, and more that attach and detach quickly. In the case of the Go Sling Mini, there’s a nylon loop on each side where HUB Clips can attach. In turn, a HUB Clip serves as a small dock for other HUB accessories like a HUB Cardholder or HUB Keychain. Alternatively, we just use the loops to clip our own carabiners on.

ALPAKA Go Sling Mini | There’s nothing quite like the tactile feel of a magnetic buckle.

Another optional accessory is ALPAKA’s Magnetic Stabilizer Strap. There’s a single D-ring at the bottom of the Go Sling Mini where this attaches, while the other end clips directly along the main strap using a snap fastener. Yes, this accessory strap comes with its own magnetic buckle, though it’s not mentioned if it’s also a Fidlock-branded one. Additionally, it’s directly compatible with HUB accessories like the HUB Cardholder and HUB Keychain without the need for a separate HUB Clip.

We can’t speak to the added stability this optional strap brings since we haven’t tried it. On the other hand, we don’t feel that the Go Sling Mini needs one since it wears closely and comfortably with just the main strap alone. But for those who take their slings on heavier activities like biking and jogging, it might be worth looking into.

We’ll start the tour of the Go Sling Mini with the front pocket since its thin visor-like appearance is somewhat eye-catching in and of itself. The opening is located fairly high along the front of the sling. We’ve seen slings, like the Aer City Sling 2, whose front pockets are more centered, which means a lot of their space is located underneath an upper lip—not so with the Go Sling Mini.

There’s more than enough space for small quick-grab items like loose change, a pack of wet wipes, transit cards, and even a smartphone. However, the available space here is affected by how tightly packed the main compartment is. Some packing strategy is required so that each compartment is maximized. As for organization, there are two liner pockets and a built-in key clip. The key clip has some length to it, but it’s also quickly detachable. We remove it whenever we have to unlock a door since it’s easier than awkwardly leaning forward.

Around the back of the Go Sling Mini, there’s a security pocket that looks similar to the front one. This makes both sides almost identical, if not for the more bulging appearance of the front. Anyway, the pocket itself has a wide opening, something that shouldn’t be taken for granted with security pockets. Its accessibility is fairly easy while also being well-hidden for security reasons. Space is limited to mostly flat items like passports and other travel documents.

The main compartment itself features lockable zippers, so it’s not lacking in security, either. Inside, there are two liner pockets along the front side and one large liner pocket for an iPad Mini or Nintendo Switch. Yes, ALPAKA specifically names those two as compatible, and indeed they do fit. Our Switch is able to fit inside the well-padded, soft-lined pocket with both Joy-Cons attached. This is a feature the Go Sling Mini shares with the Atom X Sling, which can also fit a Switch with both Joy-Cons attached.

Unfortunately, the pocket lacks a toggle or tab to lock it down. The result is that the padded divider slouches open, covering most of the open space inside the main compartment. This hampers accessibility noticeably as we find ourselves always needing to peek under the divider to get items beneath it—which we have a lot of. The Go Sling Mini has a fair bit more room than the slim Atom X Sling. Items like a thick wallet, high-capacity battery bank, and some snacks feel right at home in the middle of the compartment. The gray liner isn’t too bad with visibility either.

It’s up to you whether the slouching divider is more of a nitpick or a dealbreaker. For us, the comfort and capacity of the Go Sling Mini outweigh the relatively minor con. Organization is a bit minimal for a sling of this size, but we also don’t find it too lacking. Despite the dirt-prone Kodra HT and sticky zippers, it’s still a solidly made sling, especially for those who take their Nintendo Switch on the go.

Get your questions about the ALPAKA Go Sling Mini answered from our team and the Pro Community right here on the page. Plus, join discussions with other members about gear, guides, and more. 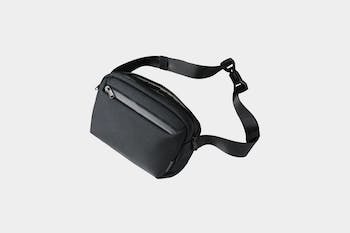 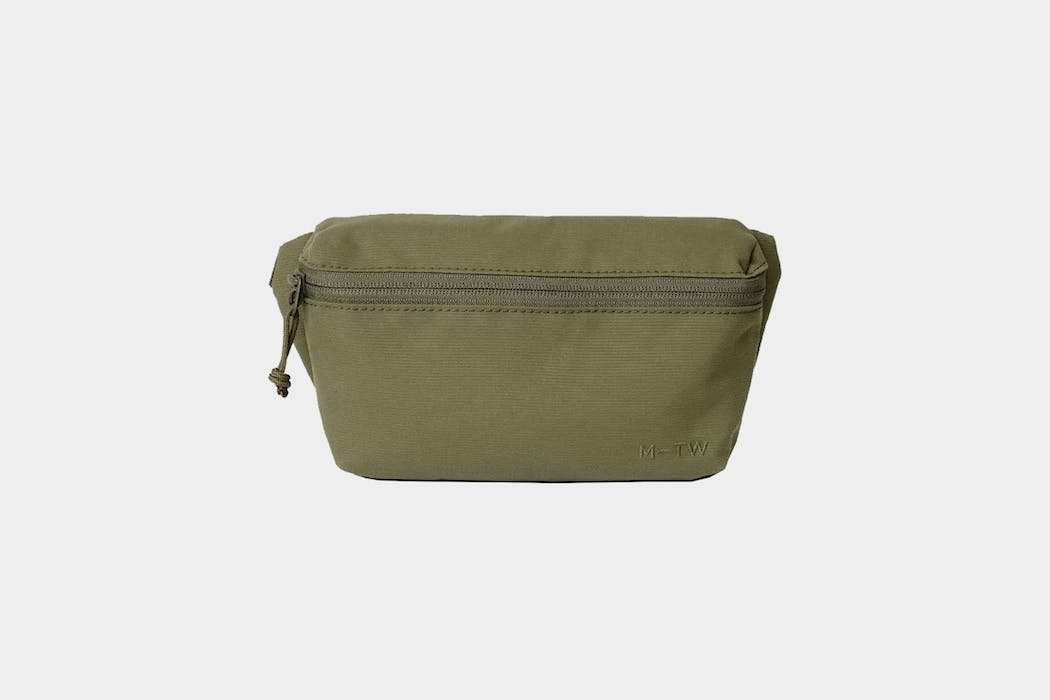 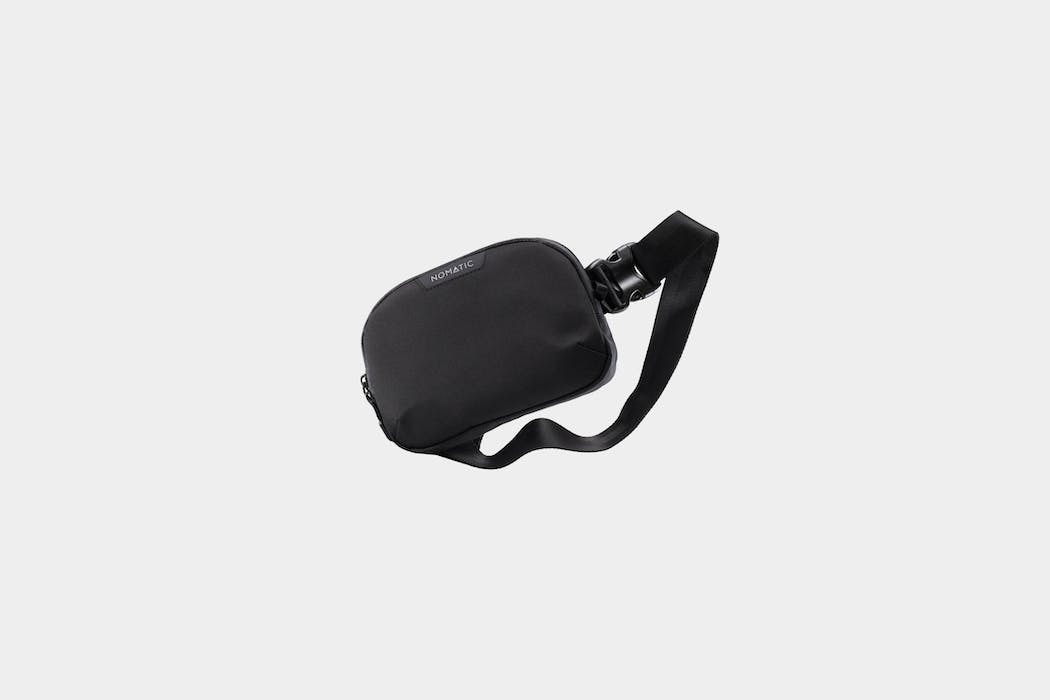 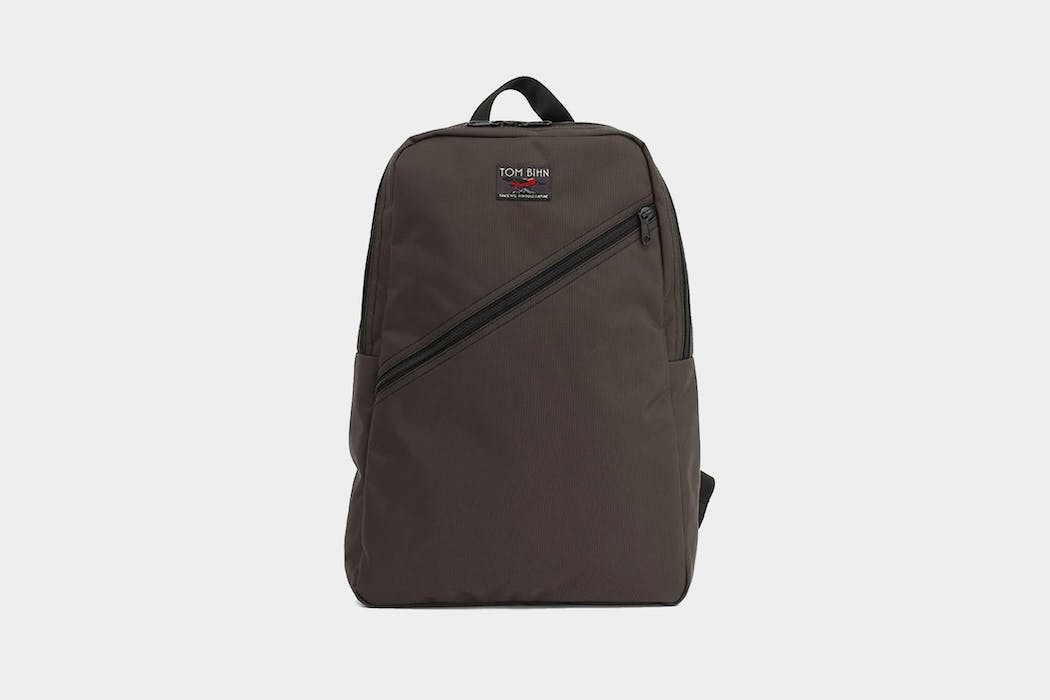 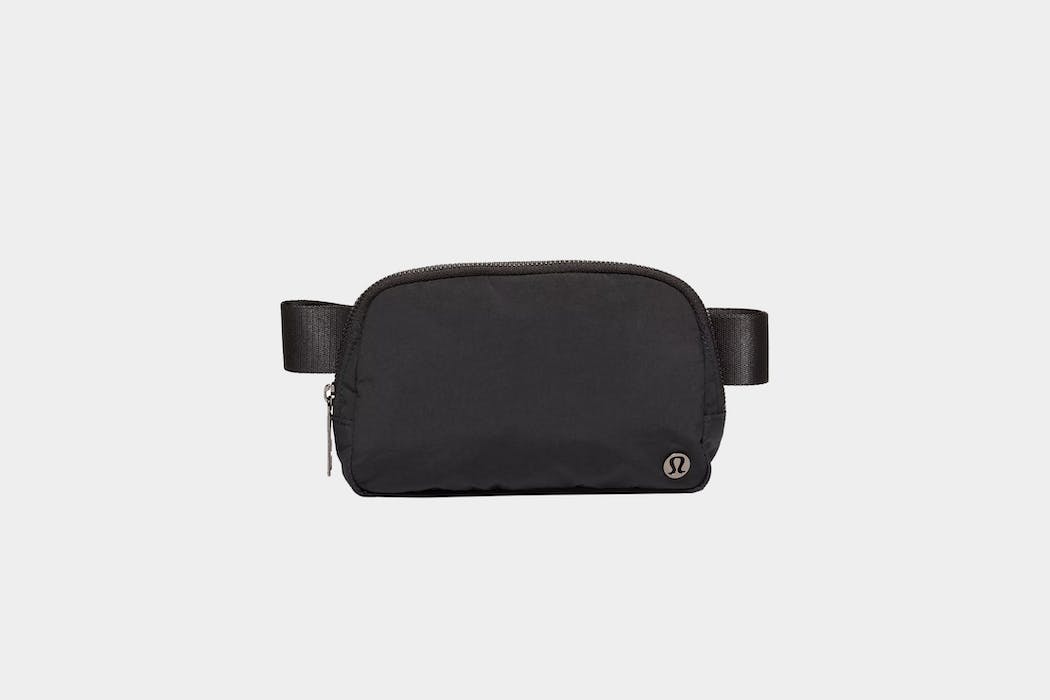 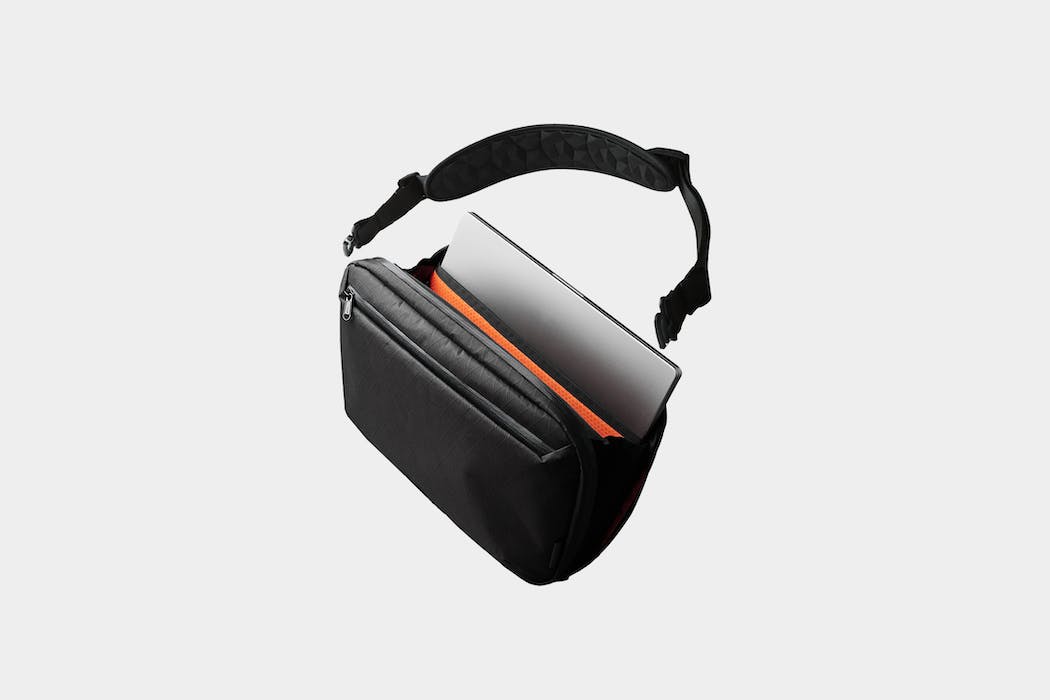 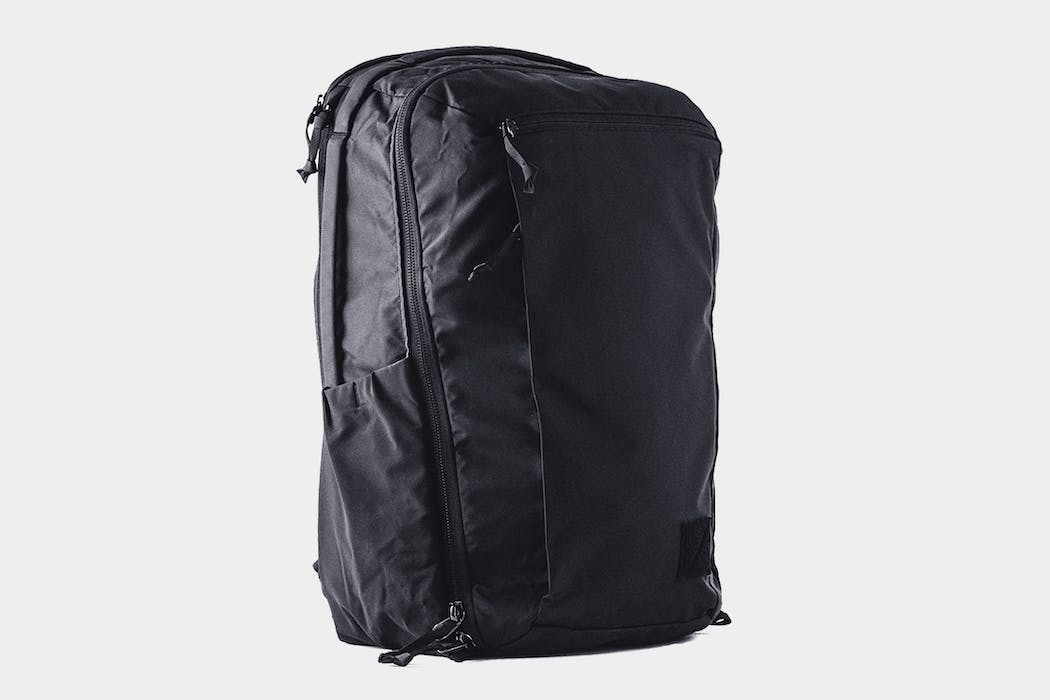