Among the many uncontrollable factors of travel are fellow travelers. Now, we’re not saying everyone is unreasonable and rowdy, but with the sheer volume of people traveling, you’re more than likely to encounter a few of them. Worse still, you may end up sitting next to them on a nine-hour flight. Then what do you do? Forget sticking your fingers in your ears; there are earplugs for that.

In this review, we’ll be taking a look at Loop’s Quiet Earplugs. They’re sleek, stealthy, and, as we’ve found out, good enough to block most background noise without totally depriving you of your hearing. On the flip side, we’re not encouraged by the plasticky casing they come with, nor are we fans of how the buds are replaced.

The Quiet Earplugs come with a fairly minimal-looking case. It only has a simple debossed Loop logo at the front and a stretchy attachment loop. The small case feels sleek, like a stealthy, albeit jumbo-sized AirTag.

The case has held up pretty well with no major scuffs to speak of, but it does feel plasticky. It has that distinct flimsy feeling you get from something that’s made from a thinly constructed plastic. This is most apparent when you pry the case open through a divot, separating the two halves. The process reminds us of opening one of those novelty packets of gum.

The hinge also feels sticky and rigid. While rigid may be a good thing in most circumstances, here, it feels worrying with the thin plastic; it almost feels like it’s brittle. We can’t say how well the case will hold up over time, but the signs aren’t encouraging.

The earplugs themselves have a sleek matte black finish. We’re huge fans of black, but the matte is just extra cherries on top. These aren’t plastic, by the way, they’re made entirely of silicone, so they’re not as rigid as the pictures may suggest.

Despite the silicone construction, the earplugs actually feel more velvety. This, in turn, makes them feel more classy, like something you’d find hidden away in a jewelry box—Batman’s jewelry box.

The most distinctive visual feature of the Quiet Earplugs has to be the loops, but they’re not there just for mere show. They’re easy to hold, which means the buds aren’t a hassle to put on even with the butteriest of fingers.

As for the fit, each Quiet Earplugs come with a set of different-sized buds. You get a choice of extra small, small, medium, and large. Your mileage may vary depending on what you’re comfortable with, obviously. You’ll want to choose the one that makes the best seal possible for the best results.

If you’ve ever replaced the buds on earphones before, then the process is basically the same for the Quiet Earplugs. First, pull off the ones already on the earbud itself. Next, take the correct-sized buds and invert the silicone to expose the neck. Finally, insert the exposed stem into the neck. Check out the GIF below if you need a more visual demonstration.

The process can be tricky because both the bud and the main plug are made from soft silicone. It’s kind of like pushing a gummy worm through a straw that’s also made of gummy.

The Quiet Earplugs don’t completely block out all the noise around you. They reduce noise levels by about 25 to 27 decibels; good enough to block out background noise but not someone shouting in front of you. This means you’re not totally depriving yourself of situational awareness, like if the person next to you is calling your attention.

On the other hand, we found these effective enough to get good sleep during plane rides. Imagine a cabin full of people, each having their own conversations, with maybe a kid or two laughing thrown in the mix. That’s the kind of situation where these excel.

It’s also worth pointing out that wearing the Quiet Earplugs in public isn’t awkward by any means. The loops look stylish enough that they can pass off as futuristic and sleek-looking earphones. They also sit flush inside your ear, unlike some earplugs that stick out Shrek-style.

While the case could use some beefing up, the Quiet Earplugs themselves do the job quite well. Sure, changing the buds takes some work, but you shouldn’t be doing that too often once you choose the correct size. Additionally, their sleek style and low-profile shape make them easy to wear in public. They have the looks, and they certainly put in the work.

Get your questions about the Loop Quiet Earplugs answered from our team and the Pro Community right here on the page. Plus, join discussions with other members about gear, guides, and more. 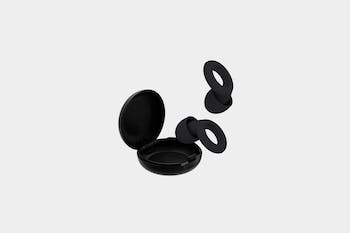