Odor-resistant, quick-drying, and oh-so-cozy, the Coalatree Evolution Hoodie is a solid addition to your travel wardrobe—if you don’t mind its causal look.

While traveling, there are days you want to look like an Instagram model in a floral-print dress, casually watching the sunset over the ocean. Other times, like on an 8+ hour transatlantic flight, you simply want to be cozy.

The Coalatree Evolution Hoodie is ideal for those cozy days. It’s a hoodie, so it won’t win you any fashion awards, but it’s comfortable, warm, and has a surprising amount of features.

Now, before we jump into the review, we want to note that although there are men’s and women’s landing pages on Coalatree’s website, the Evolution Hoodie does not come in a men’s or women’s specific fit. (Yeah, it’s a little confusing). Just keep that in mind when deciding what size will work for you.

Like we said, the Evolution Hoodie is solidly a hoodie. It’s not sleek or urban, although it’s not dumpy either. And the branding is minimal, which is exactly what we like to see when it comes to clothing. At the time of this review, it’s available in four colorways: Black, Green, Maroon, and Oatmeal (gray).

It’s made of a blend of spent coffee grounds and recycled plastic bottles (called recycled S-Cafe® polyester) and bluesign® polyester. Not only is this eco-groovy—something we always appreciate—but infusing coffee grounds into yarn has a whole host of features.

Unfortunately, you won’t smell like coffee, but you also won’t smell like B.O. Coffee grounds are a natural deodorizer, so this hoodie has solid odor-resistance. We’ve been testing the hoodie for two months and have only washed it once. This a huge plus for travel when you don’t always have the time or the resources to wash your clothes. And because the grounds are embedded into the yarn, the odor resistance also won’t wash out.

Plus, S-Cafe® polyester will protect you from harmful UV rays and is quick-drying, so you’ll be set for all sorts of weather. The Evolution Hoodie has an additional DWR coating for water-resistance. To be clear, it’s not a raincoat. You will get drenched in a torrential downpour, but if you need to make a dash to the bus stop while it’s drizzling, you should be okay.

And, remember, the hoodie is quick-drying. So even if it does soak through, it’ll dry off in no time. A feature that also comes in handy if you don’t have access to a dryer (which is often on the road).

The fabric also feels lovely—so soft it’s like you’re wearing a blanket. It’s a great length too and has thumb-holes, which effectively keeps your hands warm (you know, to a point. You’ll still want real gloves in freezing temperatures and snow situations).

The hood, which is your standard sweatshirt hood, has drawstrings to pull it tight. We tested the sweatshirt on a windy, New York City winter day and the tightened hood kept us warm. Maybe it wasn’t the cutest look, but it worked great.

And that brings us to the kangaroo pocket, which is cleverer than it looks. The zippered opening at the top is discrete. It’s tucked beneath a layer of fabric, so pickpockets won’t know it’s there (unless they’re reading this review). Plus, it’s on the front of your body and it’s zippered, so your things should be safe.

Inside, there are a couple of small, velcro pockets to organize your smaller items. We’ve used them for headphones, ROAV sunglasses, lip balm, and things of that nature. There’s also a key loop, so you won’t have to dig around for your keys when you need them. The rest of the pocket is essentially one big bucket of space to throw whatever in. We’ve popped our passport here to make the airport process more streamlined.

A word to the wise—don’t weigh this pocket down with too many items. It’ll get a little saggy. But it’s a great spot for the daily essentials and the stuff you’ll want quick access to while in-transit (flying, busing, snowmobiling…)

There’s also a headphone port, which is there if you need it but doesn’t get in your way if you don’t.

Finally, the Evolution Hoodie packs into its kangaroo pocket. It’s a little bit larger than other compressible jackets we’ve tested, but it still packs down to a decently small size that shouldn’t take up too much space in your pack. And it’s fairly lightweight.

It can be a little tricky to stuff the hoodie into its pocket, especially when it comes to zipping it up, but if you have some patience you’ll eventually get it there. And we haven’t had any problems with the zipper so far.

The great thing about the hoodie’s compressibility is that it also doubles as a travel pillow in a pinch—on a plane, at a hostel, while sunbathing on a rock (a common occurrence, according to Coalatree’s marketing photos). The fabric is so soft that it’s nice to lay your head on.

We’ve been testing the Coalatree Evolution Hoodie for two months and taken it on both domestic and transatlantic flights. And we’ve worn it as both a mid-layer and outer layer. Overall, it’s a super cozy, comfortable sweatshirt. It’s ideal for those travel days when you want something soft and warm (we can’t be the only ones who always get freezing on a plane). And the kangaroo pocket helps you keep your essentials organized, handy, and safe.

We’ve noticed a small amount of pilling and a few loose threads, but nothing concerning just yet. We’ll be sure to keep you updated in the Usage Timeline.

This hoodie is ideal for those days you just want to be cozy. It doesn’t have a sleek or urban vibe, but we’re willing to settle for this aesthetic for that extra comfort.

The kangaroo pocket on this hoodie makes it ideal to wear in transit. It’s been comfortable to wear on a long-haul flight so that we could catch a few z’s. Plus the pocket comes in super handy to keep all of those quick-access items easy to grab. During the flight, we stashed our phone, earphones, lip balm (you know the essentials) and then we popped our passport in for making the airport process more streamlined. Now, you don’t want to weigh this pocket down with too many items—your kangaroo pocket will get a little saggy! But it does come in super handy. We’ve also found the odor-resistance works well, and despite multiple wears as an outer layer, it still doesn’t need to be washed.

It’s starting to show some pilling on the inside. And while the material isn’t as soft as it was, to begin with, it’s still super comfortable to wear.

We’ve noticed some more pilling over the last couple of months. As we mentioned at the beginning of this review, this hoodie is not sleek or urban, however, the increase of pilling definitely makes it feel even more casual.

Get your questions about the Coalatree Evolution Hoodie answered from our team and the Pro Community right here on the page. Plus, join discussions with other members about gear, guides, and more. 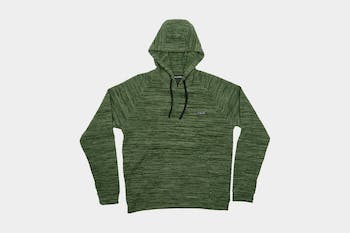