The Chrome Industries Tensile Ruckpack has a bold look and feels at home on rugged adventures, though certain features don’t feel thought out.

The Tensile Ruckpack has many features we’ve seen from Chrome Industries before, like an oversized buckle closure and shoulder straps that are far from rigid, however, the overall vibe of the pack is a little different than we’re used to generally speaking. Is this a step in a new direction for Chrome, or is this another classic cycling bag? Let’s find out!

The pack is crafted from a 3-layered recycled and laminated nylon and polyester. A lot is going on in that description, but the material has a unique feel, so it warrants such a long name. It feels almost papery, but also durable and rugged. It doesn’t have much give, which hinders stuffing the pack full, but gives the pack a stuffed-full look, even though it doesn’t have that much structure.

The pack comes in two colorways at the time of writing—Black and White. The Black colorway is all black except for the Chrome logos, which we will get to later. The white model has grey diamond accents throughout and black straps that run from the back of the pack to the front and add a bit of contrast and a lot of structure to the pack. The grey lining adds contrast too, and it all comes together nicely.

We have the White colorway on hand, and for over a month, it’s traveled 100 plus miles on the pot-hole-ridden streets of Detroit. It’s held up well, but the white colorway is constantly dirty. Our initial testing phase started in the spring, which means a lot of rain and mud, but it always seems to be dirty, even during stretches of dry weather. The pack cleans up pretty well, though it needs a refresh about once a week. In use as a travel daypack, you might have to clean it once you return home from a weeklong trip or once or twice on an extended trip.

As far as weatherproofing goes, we’re a little let down by the Ruckpack. It handles light rain perfectly, but after even 15 minutes in a more steady drizzle, the interior fabric begins to feel wet. It’s by no means dripping with water, but it’s enough moisture that we feel it’s important to take our tech gear out of the pack when we get to our destination.

The Chrome logo is prominent on the front of the pack, appearing on the main buckle to access the main compartment. The logo looks nice, but the buckle itself can be finicky.

Unless the pack is super full, the buckle is rarely tight. This is more of a pet peeve than an actual issue, but it makes it feel like it’s not secure. The bottom of the buckle can be used as a bottle opener, which is great for cracking open a cold one with friends at a park or after a long ride.

The Chrome logo is on the bottom of the front of the pack too. It’s rubberized and has a quality look and feel, and we prefer its placement to the logo on the buckle, although both are nice.

All of the zippers on the pack are YKK #5 zips, which work splendidly. The exterior zipper is an AquaGuard model, and the interior zippers are standard models.

The side compression straps have Duraflex hard plastic hardware, and the sternum strap has a Woojin buckle. The shoulder strap has a Chrome branded adjuster, and there are unbranded drawstring adjusters on the water bottle pockets and the drawstring that closes the main compartment. It’s a little bit of everything as far as hardware is concerned, but it all functions as it should, and we haven’t had any issues with it.

The shoulder straps on the Tensile Ruckpack are pretty wide and have a slight curvature, enabling them to form to your body. There is little to no padding, but they do have aeration that keeps things cool. There are a ton of attachment loops on the straps, so you can hang your hat when the sun hides behind a cloud, attach your GoPro to get footage of a new city, or hook on an accessory like the Yakoda Utility Pouch.

The sternum strap is on a rail, allowing you to make micro-adjustments, which is excellent for finding your perfect configuration. The strap itself does seem to loosen over time, and we’re constantly re-tightening it to keep it where we wanted it. This may be due to rough cycling to and from work every day, but it’s a little disappointing.

The back panel has a layer of padding between the exterior fabric and interior liner, though it’s really thin. You can often feel items inside your pack, especially if you don’t have a laptop inside to make the back panel more rigid. If you have flat items or have your computer inside, it’s pretty comfortable, even when taking it on long walks or rides. It doesn’t have any aeration or mesh, but the fabric is quite cool, even with that being said. It can get sweaty on warm days, however, we haven’t found many packs that can stop that.

The highlight of this pack for us is the two water bottle pockets. They have an elastic adjuster to tighten around whatever you throw inside, and they are large enough to fit a 48 oz Nalgene bottle, which is the same thickness as a 32 oz Nalgene, but quite a bit taller. Even when full, the large bottle never seems like it’s going to fall out or tip over because of how tight the elastic adjustor is.

The water bottle pockets are underneath a compression strap, which is a little bit of a bummer. If you don’t have much in the pack and want to compress it down, you can’t compress the bottom if there’s a bottle inside the pocket. You can still compress the top using the upper straps, though we’d like the option to do both at any time.

The top handle is pretty basic and is crafted from durable materials. There isn’t any padding or aeration, so it isn’t breathable, but don’t worry, you probably can’t fit your hand in there anyways. This thing is super tight, which isn’t a huge deal if you don’t hold it by the handle for extended periods, but it’s odd not to be able to slide your hand through it easily.

There’s a front compartment with access from two sides, the left and the right, like a hooded sweatshirt front pocket. This is nice because you can take a single shoulder strap off, swing the bag over, and get into either side.

There were a few occasions where we forgot to close one side, leaving the opportunity for something to fall out, but luckily nothing did (that we know of). The compartment is pretty tight, so there isn’t much room for things to move around. There’s enough room for a Kindle, though because it lacks much padding or protection, it’s typically just a place to put our phone, wallet, and keys.

Under the top lid of the pack is another small pocket. To be honest, it’s a pretty randomly placed pocket and feels a bit like an afterthought. We stow a first aid kit here for safekeeping, as we couldn’t figure out a better use for the space.

The backside houses the laptop compartment, which can fit up to a 15-inch laptop. We have no issues transporting our Macbook Pro to and from work inside the compartment, and it’s relatively comfortable for how little padding there is between it and the back panel. There is a little space between the bottom of the laptop slider and the bottom of the pack, but as the pack doesn’t have a ton of structure, it seems like our laptop is sitting on the ground whenever we set it down.

A long key ring extends from the top of the main compartment, which is excellent for using your keys without removing them. And, since there isn’t any way to attach something to this ring without a clip or other keyring of your own, the keys you place here are meant to stay put. Since you can quickly grab the keys to open your hotel or Airbnb door without removing them, and they are harder to steal without being harder to use, which is a nice security feature.

The rest of the main compartment is shaped like a rectangle with slightly rounded corners. There’s a ton of space to work with here, although it can be challenging to navigate things in the bottom of the compartment when you have it completely packed. It’s a long and skinny rectangle, so it’s hard to make eye contact with that pair of pants you stuffed down at the bottom for safekeeping. Overall, we’re happy with how much we could stow inside it and easily got into the groove of organizing our gear to deal with the long and skinny design.

Overall, we enjoy using the Tensile Ruckpack, though a few things bummed us out while using it. The buckle never quite feels tight, there isn’t a ton of padding, and accessing things on the bottom of the pack can be troublesome. Nothing ruins the overall use of the pack for us, however, we struggle to perform some specific tasks. But hey, you can open a beer, which isn’t half bad.

Get your questions about the Chrome Industries Tensile Ruckpack answered from our team and the Pro Community right here on the page. Plus, join discussions with other members about gear, guides, and more. 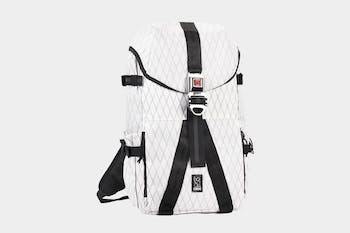