SealLine’s E-Case is a handy little pouch that lets you take your smartphone for a swim, though it soaks up some water above the seal and around its trim.

Beach trips are more popular than ever. Just scroll through your social media feed, and chances are you will find recent photos of one. We swear, even when it’s winter, you’ll find people sharing them from the tropics. At which point, one has to ask, is everyone really bringing their smartphones that close to seawater? As much as we trust our iPhone’s own water-resistance rating, we don’t always want to take the risk.

Fortunately, for the extra cautious like us and those whose smartphones don’t have an IP rating to begin with, there are pouches for that.

The one we’re looking at in this review is the SealLine E-Case. It’s easy to seal, has a see-through design, and fits our iPhone 13 like a tailored glove. However, unforeseen to us, there are subtle quirks with this case that feel just a bit counterintuitive. Are they dealbreakers, though? Let’s find out.

The E-Case has a fairly minimal, fuss-free design. The majority of the case is made up of urethane film (that’s the transparent bit), with the edge trim providing accent coloring. The only true design flair you’ll find here is the integrated logo, which sits on the bottom right corner. The sample we’re testing in this review is the small size in Heather Green. Other sizes include medium, large, and extra-large, while the other colorways are Heather Blue and Heather Gray.

The material used for the trim is a 250-denier polyurethane-coated polyester/nylon blend that’s PVC-free. The material itself feels adequately strong. However, the welded edges already show some loose threads. This is a common trait of welded fabrics in general, so we’re not too worried about it. At the same time, though, we’re not exactly too sure about longevity, either.

One part where we’re worried about the E-Case is its corner loops. They’re near the edges of the trim, but they don’t have any reinforcement whatsoever. The material there is already thin, so we’re not very confident they’ll hold up well over time if you’re using a lanyard. Strength is provided by the fabric welding (loose threads notwithstanding), though we’re still doubtful given how thin the material is.

The E-Case is IPX7-rated, meaning it can be submerged for 30 mins up to a meter of water. For those unfamiliar with IP ratings, the IP stands for Ingress Protection, while the first and second digits correspond to dust and water resistance, respectively.

Before anyone says it, yes, the IP68 rating on our iPhone 13 is technically better than the E-Case’s IPX7. That’s missing the point, though, since we’re adding another layer of protection. Think of it as wearing clothes even though our skin already does a good job of protecting us. With that out of the way, let’s get our smartphone in there, shall we?

Opening the E-Case is as easy as opening a resealable bag, and that’s because their mechanisms are very similar. We’re not downplaying the engineering SealLine put into their own SealLock here; we’re simply impressed at how easy it is to operate compared to a reusable bag.

That said, getting our iPhone 13 to fit is another story. We use a pretty standard-sized case, nothing too bulky, but it’s not a thin skin, either. With the case on, our iPhone 13 just about fits into the small-sized E-Case. The takeaway here is that if you have a larger phone, or want more leeway, definitely consider the medium size and higher.

How you orient your phone matters as well. Remember the logo we mentioned a section earlier? It can obscure part of a smartphone’s display, so we always make sure to put the logo on the side of the camera.

Of course, you can also put different kinds of everyday carry items inside the E-Case, not just a smartphone. For example, if you absolutely must carry a simple wallet into the water, the small-size E-Case is good for that.

Going back to smartphone usage (because that’s the gear we want to take into the water), we’re happy to report that functionality remains good. The touchscreen remains operable, though voice-to-text is also an option. Camera quality is slightly affected since the urethane film isn’t exactly lens material. Above all, Face ID also works!

The trickiest part is pushing the side buttons, like the lock and volume control. This is especially hard if you’re smartphone has buttons on the side where the seal is. Some maneuvering is required before you can press them, but it’s not impossible to do.

There are two counterintuitive quirks about the E-Case we have to point out. First, the trim does retain some water, which is a bit strange considering it’s designed for use in (or near) water. Second, just above the seal itself is a small lip, and this also retains some water. Once it’s time to get your smartphone out, some of that water can seep into the case. With that in mind, we recommend a quick wipe with a towel before opening the case.

The E-Case’s main weak points have a lot to do with when it’s out of the water, both in getting our smartphone in and taking it out. When submerged, though, it gets the job done, and that’s despite the simple yet easy-to-open seal. So if you don’t mind the slight hassle, then do consider the E-Case.

Get your questions about the SealLine E-Case answered from our team and the Pro Community right here on the page. Plus, join discussions with other members about gear, guides, and more. 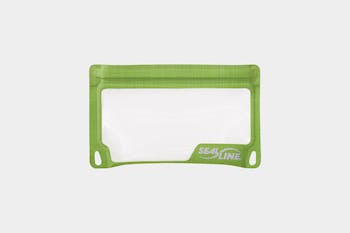