The SealLine Baja View Dry Bag excels at keeping gear dry but is on the larger side, so bringing it on one-bag trips is tricky.

The SealLine Baja View Dry Bag has a rugged and see-through construction, which we’re all in for. We’ve tested some ultralight water-resistant stuff sacks from Matador, which have a leg up in the size department, but the SealLine is crafted from waterproof materials that will excel in the water resistance realm. Is there a balance to be struck between size and how it handles water? Let’s find out.

The SealLine Baja View Dry Bag is crafted mainly from 12-ounce transparent polyurethane film, which has the classic plastic-y feel we’re used to for this material. If you were to deconstruct the bag, there’s just one big piece of clear polyurethane cut into a rectangle. It’s welded together on one end and then welded onto the black bottom of the bag. It’s simple but effective.

The SealLine logo is in black on the side of the polyurethane and isn’t terribly noticeable against the gear we stowed inside. If you put all-white clothes inside, that might be a different story.

There’s another logo on the inside of the bag near the top of the fold, though you can’t see this one unless you have it unrolled. There’s also a diagram depicting how to close the bag and other information on the bag’s construction.

The bag has a black bottom, which appears to be polyurethane film, but isn’t transparent and has texture. This adds a little grip to the bottom of the bag so it won’t slide around as much, but it’s still pretty slippery in wet environments.

The entire construction of the bag is PVC-free, which is one of the worst plastics for the environment. This is a big plus from Mother Nature’s perspective.

All the seams on the dry bag are welded instead of being stitched and taped. This is better at keeping water out, as there aren’t any gaps between the stitches for it to creep inside or come loose. We dig the welded seams on various Nite Ize products, so we’re happy to see them working wonders again here.

The clip on the top is made by Duraflex, which works as well as clips we’ve used from them in the past–it’s snappy and easy to manipulate. The clip is large enough to feel sturdy but small enough to not get in the way, either.

The model we have on hand is 5-liters, but there are 10-liter and 20-liter models available, too. There are also models that aren’t clear but maintain the same design. Those go up to 55-liters and come in four different colorways.

One last note about the construction of these dry bags—they’re made in the United States! This isn’t terribly common, although their website states that they’re crafted from imported materials and some made inside the United States. Either way, it’s neat to see some bags made locally here in the states.

To kick off the usage of this bag, we should start by going over dry bags in general. A dry bag is rarely completely waterproof, which holds true for the Baja. The top of it doesn’t even actually seal; it just folds over unto itself to create an extremely water-resistant seal. The more you fold it, the more water resistance it has. But no matter how much you fold it, there will never truly be a waterproof dry bag that utilizes this mechanism, as there isn’t an actual closure. The pack folds over itself repeatedly, so there’s always a chance water could sneak inside.

With all of that said, the Baja is highly water-resistant, and we don’t have any issues with our gear getting wet while using it. The diagram on the inside of the bag says to fold it three times, but we often find ourselves folding it more than that. One reason is that we don’t usually use all the space inside, and another is because it felt safer to fold it more times.

The diagram also has a little picture of a camera and a phone with a line through them. We don’t have any issues with water sneaking inside, but these bags are not waterproof, as we covered above. It isn’t worth risking putting your phone, camera, or anything that can’t eventually dry out inside unless you absolutely have to.

In use, we have a few tips for making the most of this dry bag. Once our gear is loaded inside, we fold the top just once. Then, push down on the bag to get as much air out as possible. After the air is out, fold it again twice, and more if you can.

The more folds will not only keep water out, but it will let less air inside, which won’t undo the air you just pushed out as quickly. Our method might not look as nice as if you were just to fold it three times flat, but we found this was an excellent way to pack the dry bag down more.

At 5-liters, the bag we have on hand is far from huge, but it has more than enough room to stow an entire outfit if you get caught in the rain or a couple of swimsuits if you’re traveling with your family or friends.

In addition to keeping water trapped inside, it will also keep smells inside, at least for the most part. After keeping wet swimsuits inside for a few days, they’re bound to get pretty stinky, but the polyurethane keeps the smells trapped pretty well. If you stow wet clothes much longer than that, you may have an issue with mildew or bacteria.

Overall, we’re delighted with how the SealLine Baja View Dry Bag performed; we just wish that it was a bit smaller when not in use. You can use it as a packing cube, but it’s awkward in use for much else than a dry bag. The Matador Droplet Water-Resistant Stuff Sack is a fraction of the size when not in use, but the SealLine is far more water-resistant over time than the Matador. You will only bring this item on specific occasions where you know that you’ll need it, as otherwise, it takes up too much room.

tldr; it works great if you’ve got the space.

Get your questions about the SealLine Baja View Dry Bag answered from our team and the Pro Community right here on the page. Plus, join discussions with other members about gear, guides, and more. 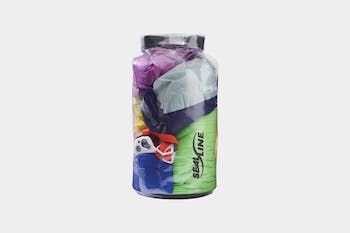