Small and durable with impeccable craftsmanship, the Chrome Cardiel Shank is a barebones hip pack that will hold the essentials—and only the essentials.

If you’re not a fan of the classic fanny pack look, you’re not going to like the Chrome Cardiel Shank. There are a lot of things to love about this bag, but you’re not going to care about any of them if you’re trying to strategically hold your hands over the bag every time you leave the house.

But if you’re ready to embrace your inner ‘90’s dad (or pro wrestler—you’ve all seen that picture of the Rock? If not, it’s worth a google) then you may love the Cardiel Shank…as long as you don’t plan to carry too much stuff while you’re out and about.

We’ve been testing the Chrome Cardiel Shank for two weeks as a daily driver around Detroit, Michigan and on a trip to Chicago, Illinois. The Cardiel Shank is named after professional skateboarder and “legend,” John Cardiel, who also helped design the hip pack and the two other bags in the Cardiel Collection.

We thought wearing a bag designed by a skater legend would make us look hip in that classic skater way, but that dream hasn’t become a reality. While it does have a sleek patch sewn on one side, we can’t get over how much this thing screams fanny pack. We’ve been testing the Shank in navy, but at the time of this review, it’s available in four colorways, the boldest of which is a bright orange.

You can wear the Shank as both a hip pack (the 2019 name for fanny pack) and a sling bag, although we’ve found the former works better. As a sling bag—which is worn crossbody—the shank is stiff and doesn’t contour to the back or chest very well. Still, it’ll work when you need it to.

Whichever way you wear it, the Shank has a skinny, tall profile that doesn’t stick out or look overly bulky, which we consider to be a major plus. A number of hip packs on the market succumb to this fate, and we’re happy that’s not the case here. The one-inch strap is also easy to adjust and has a nifty strap keeper that keeps everything tidy.

We’re calling this strap keeper “nifty” because of its unusual design. Unlike most strap keepers, it doesn’t hang loose and is instead attached to the end of the strap. It works well and stops you from ever having to worry about the strap dangling. (If you’re anything like us, that’s a huge relief. A dangling strap is the stuff of nightmares!)

All that said, the slim profile on this bag means it’s not ideal for carrying more than the essentials. There’s only one compartment, and it doesn’t hold much stuff. We’ve only been able to fit a medium-sized Topo Designs Pouch, sunglasses, and phone inside. Moreover, the items you can fit have to be stacked on top of one another, so accessing them can be a tiresome, messy job.

There is a mesh pocket inside the main compartment for carrying smaller items you don’t want to lose (multi-tools, headphones, your stamp collection, etc.) but it’s loose and flimsy, so anything heavy (think battery pack) will spill out of the pocket. We think it could be improved if the elastic on top of this mesh pocket was actually taut or, if Chrome wanted to get extra fancy, closed with a zipper (but, hey, we’re not hip pack engineers).

You’ll also find a key loop, which is just a piece of looped rope. We usually prefer our key leashes to have a clip for easy attaching and detaching. The rope requires you to wind your keyring around it, which can be slow and tedious, so we almost never use it.

On the back of the bag, you’ll find a strap that’s meant to hold a U-Lock. We don’t tend to carry a U-Lock with us when traveling, but if you do, then this strap will be a godsend (there aren’t many hip packs with U-Lock holsters). We’ve used it as an extra handle to grab the bag.

Chrome Industries is known for making high-quality, durable gear that can handle whatever you throw at it (to an extent). And the Shank is no exception. The exterior is made from a 1050D nylon and lined with tarpaulin. This material is super tough, yet lightweight.

The main zipper—from the Japanese manufacturer, YKK—is weather-resistant with a thin polyurethane coating that repels water. This zipper—called an Aquaguard—is stickier and harder to work than other kinds of zippers, but it’ll protect your stuff from the elements. If you find yourself in inclement weather often, then this tradeoff is worth it. If you’re more of a blue skies or bust kind of person, this may be overkill.

Another noteworthy feature is the Shank’s packability. It’s small and lightweight, meaning you can pack it and forget it until you need it. The Shank is intended to work with Chrome’s Cardiel Fortnight Backpack, but it’ll work with any bag you own.

And we’d be remiss not to mention one last feature that Chrome touts on its website. The Cardiel Shank “can definitely hold at least three beers,” the company says. We can understand how this might be a deciding factor for some.

As we said, we’ve been testing the Cardiel Shank for two weeks now. We’ve been frustrated with the (lack of) internal organization and how little can fit inside this thing. But it’ll work just fine if you’re only looking to clear out your pockets.

We’ve certainly been impressed with the overall craftsmanship. We haven’t noticed a single loose thread yet!

Get your questions about the Chrome Industries Cardiel Shank answered from our team and the Pro Community right here on the page. Plus, join discussions with other members about gear, guides, and more. 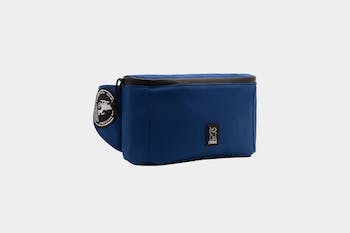