The Hydaway water bottle truly hides away, compressing into a disc the size of a CD. We’ve enjoyed testing it even though we’re not thrilled with the aesthetic.

The Hydaway water bottle is a water bottle that, as its name implies, hides away to save space when not in use. Here at Pack Hacker, we’re all about compressible and packable gear—whether that means daypacks, jackets, or water bottles—so we’ve been excited to get our hands on the Hydaway bottle and give it a thorough test.

Compressible gear tends to be great for air travel, as you can compress an item, store it in your travel pack without taking up too much space, and then take it out once you reach your destination and use it in all its glory. Compressible water bottles are particularly nice because you can also take them through security (while compressed inside your bag) and then fill them at a water fountain once you get to your gate.

With that said, let’s check this thing out!

The Hydaway is made of food-grade silicone and BPA-free plastic, which allows for a good balance of flexibility and structure. It’s flexible enough that you can squeeze it and compress it, but it’s still rigid enough to hold its shape and stand up on its own. Plus, there’s no chance of getting any nasty chemicals in your water.

These materials also make the Hydaway dishwasher safe and relatively lightweight, coming in at 5 ounces. It’s not the most lightweight water bottle we’ve tested, but it’s certainly lighter than your average metal bottle. The material is relatively thick, so we think it should hold up well and it seems fairly resistant to punctures, although it’s by no means impenetrable.

We don’t tend to encounter many dishwashers during our travels, so we’ve been washing this by hand. It’s a pretty simple process—if you have a small hand you’ll probably be able to get right in there with a sponge and just go to town. If you have a larger hand, you probably won’t be able to get all the way in but the flexible nature of the bottle makes it pretty simple. You can actually get close to turning this thing completely inside out.

As far as how the water bottle looks, we have to be honest…we’re not huge fans. The thing kind of looks—and feels—like a sippy cup. We’ve even gotten a few strange comments. One guy in a coffee shop asked us if it was a Bluetooth speaker, and honestly, it does have that look to it.

We’ve got both the yellow and black versions, and we have to say, the black is definitely our favorite. It looks more like a water bottle and less like a toy. But that’s just like, our opinion, man. Your mileage may vary!

The Hydaway does come in a large variety of colors, so you should be able to find something that suits your style. At the time of this review, the Hydaway website shows light blue, black, turquoise, purple, dark blue, red, gray, green, and yellow. (These colors have their own funky names, of course, like “sunset” and “thunder” but we figured we’d just keep it simple for you.)

As far as function goes, we have been pretty pleased. The size is nice—it holds 18 ounces of water, just enough for a couple hours or a small hike—and the screw top and handle work well. We particularly like the handle, as it gives you something nice to hold on to, plus it lets you attach the bottle to a carabiner on your pack.

The screw top itself works well and has been mostly leakproof for us (more on the “mostly” later). We should note that we have the version that has a small “straw” that flips up to allow for easy sipping (remember when we made the sippy cup reference?). The base model just comes with a simple top that screws off all the way.

The top is mainly made of plastic, and when you take it off you’ll notice there is a silicone O-ring to prevent any leaks. We have found that this O-ring can be a bit tricky to deal with and it makes screwing the top on a bit harder than we’d like. However, you do get used to it and it’s certainly worth the small hassle for having a leakproof water bottle.

But wait a minute, didn’t we say this thing was mostly leakproof? Yes, yes we did. Here’s the deal. That little flip-up straw can cause a few problems. Basically, when you flip it up—to use it for sipping and whatnot—it needs to align perfectly with the hole on the cap. If it doesn’t align just right, you’ll get some water leaking out and running down the bottle as you sip. And in the same vein, if you don’t close it correctly—basically, if you don’t close it all the way—you’re also likely to experience some leakage.

Now, just to be clear, your water bottle is not going to turn into Niagara Falls. We’re talking about a trickle here. But still, it’s not exactly ideal for a product that is, well, specifically built to contain water. It can sometimes leak onto your shirt while you’re using it, which sucks. We also wouldn’t be thrilled about tossing a full Hydaway bottle inside our backpack, but then again, that’s not really the intended purpose. When it comes to packing this bottle up, compression is the name of the game. If we absolutely had to pack this bottle when full, we’d be sure to toss it in an external water bottle sleeve or attach it to the outside of a pack via a carabiner.

Alright, let’s talk compression. This bottle has a totally unique way of compressing into itself. While most compressible water bottles use a “bladder-style” container that allows you to roll the bottle up, the Hydaway has opted to go for more of the “compressible dog bowl” route.

You know…those little collapsible bowls people take for their dogs during a hike? Yeah. Same concept.

When compressing this bottle, you’re going to want to open the top to let excess air out and then just kind of smash it into itself. Smash may not be the right word—you can be a bit more gentle than that—but you get the idea. All those ridges kind of fold into themselves and voila! You’ve got a silicone disc about an inch and a half high and the size of a CD that you can toss into your bag.

The Hydaway bottle also has a small travel case that you can use to contain it when compressed. If you’re concerned about weight you can probably ditch this, but we like how it contains everything and keeps the bottle—which, let’s remember, is somewhat fragile—safe from any punctures or hazards.

The final point to make about this water bottle is that it lacks any form of real insulation. The silicone may offer a tiny bit more insulation than, say, a plastic bottle—but honestly, if it does it’s too small to notice. If you stock this thing with a bunch of ice, it’s going to melt relatively quickly.

We’ve been enjoying this water bottle and it has held up well through several months of testing. We love how the bottle collapses and have found it to be a great addition to our travel setup, although we’re still not in love with the “sippy cup” look.

We have noticed that the silicone can pick up dirt and dust, but that’s a pretty minor issue. The only major issue we’ve encountered is the dripping. It doesn’t happen all the time, but every now and then some water will leak out of the straw opening at the top. Not ideal, although if you’re careful you can certainly prevent it.

The collapsible feature is great and practical! Although we’re not loving the “sippy cup” look.

Working great, except for the occasional dripping, which can be annoying when it spills on your shirt.

Get your questions about the Hydaway 18oz Collapsible Water Bottle answered from our team and the Pro Community right here on the page. Plus, join discussions with other members about gear, guides, and more. 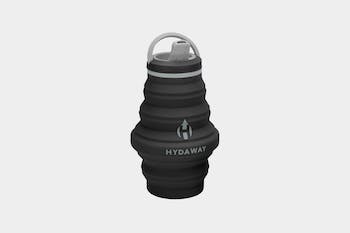