Though it dents pretty easily, the Avana Ashbury 18oz water bottle is lightweight and slim. The built-in straw makes for easy sipping once you get used to it, too.

The Avana Ashbury 18oz water bottle has a very attractive shape that’s slim with a smooth and polished finish. What we’re trying to say is that this is one sexy water bottle. It would be sexier without all the dents and chipped paint that we amassed over the two weeks that we tested it, however. We also wish it was dishwasher safe, as it can be hard to clean the straw by hand.

Oh, you didn’t know this baby featured a straw? Well, let us tell you, it’s pretty legit. Avana developed this FreeSip Spout design, which means that the bottle features both a built-in straw and an open spout for gulping. It’s used on several of their water bottles, not just the Ashbury. Unlike other travel water bottles with straws, though, the FreeSip Spout straw is inside the actual bottle itself. When you open the lid, you’ll see two holes: the normal gulp spout and a horizontal oval where the straw is.

It basically functions like an adult sippy cup, as the position of the straw means that you can drink out of it upright without having to tilt it towards your face. It can take some time to get used to—at first, we always instinctively lifted it upwards—but once you remember you don’t have to tilt it, you feel stealthy, sipping like a boss. We came to this conclusion after having several people go “woah, that’s cool,” when seeing us use this bottle.

The straw is removable for easier cleaning or in case you don’t want to use it at all. The thing is, if you’re removing it because you prefer to take huge gulps of water instead of delicate sips (or because you don’t want to sip hot coffee out of a plastic straw), the drink still comes out of both holes. If you don’t mind getting a huge gush of water or whatever you’re drinking, then cool. If you aren’t ready for such a huge water rush, then we recommend just sticking to the sippy cup straw.

Avana also donates a small percentage of the proceeds from every bottle they sell to non-profits around the world that are helping to provide water to communities in developing countries. Some projects include building rainwater catchment systems and wells in Ethiopia and India. So you can feel good knowing that your Avana purchase is contributing to some small amount of good in the world. Plus, you can track the progress of each project on their website if you’re curious.

Okay, so now that we’ve given you the low-down on Avana’s FreeSip Spout technology, let’s talk more about how it was using the Ashbury bottle. Remember how we said it was sexy at the beginning of this review? That may also be due to the Mauve color we got it in, which has an almost iridescent quality to it. At the time of this review, the Avana Ashbury comes in at least 20 different colors, including some patterns like Glacier and Reflection, which looks like the surface of a pool with ripples. There are also some matte finish options available if you want something more minimal or not as shiny. It’s also available in a 24oz version for our thirstier friends.

One thing to be aware of is that this bottle is not dishwasher safe. In case you forget that, it literally says on the bottom in all caps, “HAND WASH ONLY.” This is to protect the outer coating of paint, which makes sense, but we wish that wasn’t the case. First off, the straw is not easy to thoroughly clean by hand. Sure, you can squirt some soap down there, hold it underneath the sink and hope for the best, but will it really get clean? Who knows for sure, but that’s what you’ll have to do unless you have a special straw-cleaning brush at home. Second, the paint chips off easily even without putting it in the dishwasher, so it’s not entirely a solution anyway.

We only used the Avana Ashbury for two weeks, and it got pretty scratched and dinged in that short amount of time. It almost looks like it got into a fight with a feral cat and lost. There are several spots where the paint has chipped off, especially at the bottom of the bottle. There’s literally a ring around the bottom where the bottle meets the surface of whatever you’re setting it down on. This has the potential for a bad joke about a Japanese horror movie, but we’ll spare you. Admittedly, we have dropped this bottle a few times during testing, but there are quite a few battle scars that we don’t have any explanation for.

By now, you’re probably wondering about how well the Avana Ashbury 18oz water bottle does at keeping your drinks hot or cold. It’s a water bottle after all, so that’s pretty much its job. Unfortunately, it didn’t quite live up to our expectations in this department and we’ve read other reviews that say the same. On their website, Avana says this bottle will keep drinks cold for 24 hours and hot for 12 hours. This just straight up wasn’t the case for us. Even though it’s triple insulated, coffee and tea stayed hot for around four hours at best, while water started to go room temperature by the end of the workday. Whether this works for you or not depends on both your preference and how fast you drink, so we won’t say whether it’s a good or a bad thing.

On the cap of the bottle is a soft, braided loop with a flexi-plastic knob. This comes in handy for carrying the bottle when your hands are full, you’re going to the gym without a bag, or you want to clip it onto your backpack with a carabiner. It’s definitely come in handy for us day-to-day when we’re walking from the car to the office with a bunch of gear in tow. However, since the cap is untethered, you do need to be careful not to lose track of it.

Just as a note, we’ve seen a few other reviews that say the straw opening cracked after a month, rendering it useless since the straw no longer fit in place. We haven’t had any such issues after two weeks, but we’ll continue to use it and update our usage timeline at the bottom of this page in case that happens. We hope it doesn’t, though!

Overall, we thoroughly enjoyed using the Avana Ashbury 18oz water bottle. The slim shape slides easily into your bag and the loop on the cap makes it easy to carry when your hands are full. We just wish it didn’t get scratched up so easily and that it kept drinks cold for more than a few hours.

We’ve had several leaks when the cap wasn’t closed air-tight that we didn’t experience during the initial two weeks. The cap seems to have gotten loose over time and it takes a bit more effort to close completely. Also, the stainless steel portion of the cap keeps turning even after it’s fully screwed on.

Get your questions about the Avana Ashbury answered from our team and the Pro Community right here on the page. Plus, join discussions with other members about gear, guides, and more. 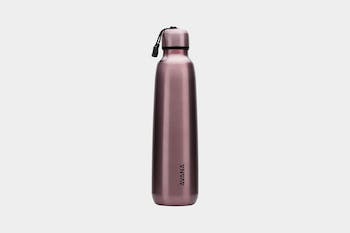